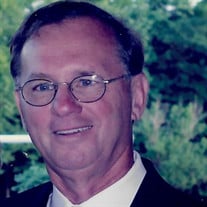 William “Bill” S. Szoke, age 78, of Strongsville, Ohio lost his battle with Alzheimer’s Disease surrounded by the love of his family and passed away peacefully on Friday, December 10, 2021. Bill was the loving son of the late Elmer “Al” and Mary; beloved husband to wife Susan; cherished father to daughters Jennifer (Dennis) Eckersley and Christina (John) Eavenson and son Anthony (Tracy) Rohm; dear brother to Steve, Jim (Alisa), and Bob; caring grandfather “Papa” to Pierce, Olivia, Anna, Evan, Jonah, Avery and Anna; “Uncle Bill” to many nieces and nephews; friend to cousin Rita and former spouse Jane; and caring man to countless other extended family and friends whose lives he made more joyous and profound for having known him. Bill was born on March 6, 1943 in Cleveland, Ohio. He graduated from Byzantine Catholic High School in 1962. Bill was most proud of his service time in the United States Army during the Vietnam War. He served as Company Clerk for his platoon from 1964 - 1966. He was honorably discharged to help take care of his family after his father’s passing. Bill worked as Purchasing Manager for many years for the likes of Cook United, Feldman and EMI. In his later years, he served as doting Papa to all of his grandchildren - he was rarely seen during those times without a child in his arms. Bill loved spending time with his family and friends including playing a round of golf, grabbing a pizza and a watching a Godfather movie marathon; attending music concerts; going to a ball game; sharing a pepsi and some Corn Twistees; eating breakfast at Bob Evans; going for long walks in the park; carving pumpkins; talking over coffee; being a travel buddy; and holding his grandchildren. Bill’s guiding principle was “do the right thing.” He leaves a legacy of kindness, compassion and generosity. His family and friends will fondly and forever remember his great storytelling, wit and humor. A Christian mass service will be held at St. John Neumann, 16271 Pearl Road in Strongsville at 10am on Tuesday, December 14, 2021 with an interment service to immediately follow at Holy Cross Cemetery in Brookpark. In lieu of flowers, memorial donations can be made to Southwest General Thomas Perciak Family Residential Hospice, 18659 Drake Road, Strongsville, OH 44136, whose compassionate care was truly one of a kind.

William &#8220;Bill&#8221; S. Szoke, age 78, of Strongsville, Ohio lost his battle with Alzheimer&#8217;s Disease surrounded by the love of his family and passed away peacefully on Friday, December 10, 2021. Bill was the loving son of the late... View Obituary & Service Information

The family of William "Bill" S. Szoke created this Life Tributes page to make it easy to share your memories.

Send flowers to the Szoke family.