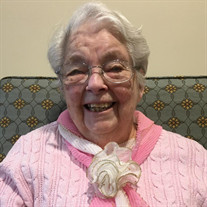 Viola Mae Dase (nee Clement), 100, passed away October 4, 2021. Beloved wife of the late Howard William Dase for 64 years. Loving mother of Kathy Ann Morgan married to Robert. Daughter of the late Allison and Molly Clement. Sister of the late Milton Clement. Dear grandmother of Robert Morgan III married to Amanda Morgan and Melanie Harvey married to Bo Harvey . Great-grandmother of Audra, Roman, and Regina Morgan and Micah, Annaliese, and Viola Raine Harvey. Viola was known to many as Mama Vi. Viola was born and raised on a farm on Drake Road in Strongsville. Viola’s father wrote to the State of Ohio when Viola was only 14 saying he needed her help on the farm and that he needed her to be able to drive. Viola was issued her first drivers license by the State of Ohio at age 14, without having taken a written or driving test. Throughout the remainder of her life, she never once took any kind of written or driving test. She was the Salutatorian of Strongsville High School class of 1938. Her picture hangs in the old schoolhouse in the Historical Village. During WWII, she married Howard and worked downtown at Stadium Boatworks. Upon Howard’s return from WWII, they built a house across the street from where she grew up. Viola continued to live in that house until she moved to Shurmer Place, and later to Cardinal Court in Strongsville. Viola came up with the name for Mill Stream Run for the Metropolitan Park System in a contest to name a part of the park that included some of her father’s property. Having grown up in and knowing the area well, she remembered the old mill that had been in the area, the stream, and of course the deer run. She submitted her entry in her father’s (Allison Clement) name to give him the credit, a selfless act she did for him in the last years of his life. The park liked the name so much, they now use it for the Strongsville Reservation. Viola loved the Cleveland Indians and was a devoted fan of the ball team her entire life. She often watched their games on her home television wearing her Chief Wahoo hat and sometimes an Indians sweatshirt. She no doubt loved baseball much in the same way as her father did, who passed along the love of the game to Viola. Her father’s old baseball uniform (a bit of a rarity in the 1920’s) was donated to the Strongsville Historical Society some years ago. Viola and her husband, Howard, loved to travel. She and her husband made it a point to take a vacation every year and visited every state at least once during their travels. She was a member of the Strongsville Historical Society. She was a tireless volunteer helping with elections, Girl Scouts, and the foodbank. She was a member of Bethel Lutheran Church for 63 years, where she volunteered in many capacities. Viola and Howard instilled a love of God, Father, Son, and Holy Spirit in their daughter by taking her to church and Sunday School every Sunday. She continued to encourage her grand and great-grandchildren to love Jesus. Her ceaseless smile will be greatly missed by all her friends and her family. ALL SERVICES SATURDAY, OCTOBER 9, 2021. Visitation 11AM-3PM at JARDINE FUNERAL HOME, 15822 PEARL RD, STRONGSVILLE. A Funeral Service will begin at 3PM at Jardine’s. Interment Hope Memorial Gardens on Monday, October 11, 2021 at 11AM. Please meet at the cemetery. In lieu of flowers, memorial contributions may be made to Bethel Lutheran Church, 7171 Pearl Road, Middleburg Heights, OH 44130 or Strongsville Historical Society, 13305 Pearl Road, Strongsville OH 44136.

The family of Viola Mae Dase created this Life Tributes page to make it easy to share your memories.

Send flowers to the Dase family.