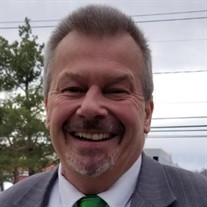 Thomas Rein, age 58 passed away May 6, 2022. Loving father of Alex and Ashley Rein. Brother of Christopher Rein and Christine Pickens. Uncle of Angelica, Elijah, Gabriella and Noah. Beloved friend and companion to Kathy. He is preceded in death by his parents Adolf and survived by his mother, Roberta Rein (nee Herbert). Tom graduated from Mentor High School in 1982 and later graduated from Case Western University with three different majors. He received his law degree from Cleveland Marshall College of Law. Tom was extremely proud of his career. He served 27 years in government service in the Cuyahoga County Prosecutors Office as an Assistant Prosecutor and as the Prosecutor for the Village of Bratenhal. He also had a full-time private law practice for 21 years representing clients all over the State of Ohio. Tom was very proud of his German heritage and, for the past several years, was a member of the Cleveland Maennerchor where he sang with the men’s choir. In addition to the love of his career, Greg Rackovan wrote the following words fondly remembering Tom’s soccer history. “With his German heritage and his dad being a player, fan, and long-time referee of the sport, it’s clear that Tom was destined to become an accomplished soccer player. He started his journey while in elementary school playing for the Concordia Soccer Club when we and his family were living in Cleveland. After moving to Mentor and starting junior high school at Shore, he brought his talents and experience to the fledgling Mentor soccer program. That’s where I met Tom for the first time 45 years ago. He played for the Mentor teams throughout junior high grades 7-9 then joined the high school team in the fall of 1979. Tom along with John Shields were the only two sophomores that made the roster of a very talented Mentor varsity team that year. Tom would go on to become an indispensable player for the team over the next three years. By the time he graduated, Tom had amassed countless goals and assists, was a leader on the field as a center midfielder, was a leader off the field as a captain, earned an all-conference selection, nearly received an all-state selection, was invited to play in the annual all-star East vs. West game in Cleveland, and did some work with the Olympic development program. However, Tom was not ready to hang up his cleats quite yet. He went on to anchor the varsity soccer squad at Case Western Reserve University for the next four years. Some of my favorite memories are of training sessions with Tom. On many steaming hot summer days prior to the fall college seasons, Tom and I would head to Shore Junior High School, practice shooting, dribbling, and passing until we were loose and ready. Then, we would set two balls about 30 yards apart and play one-on-one until we both dropped from exhaustion. I’m pretty sure I still have the bruises from those sessions nearly four decades later. But, a short drive to Headlands Beach and a soak in the lake afterward always softened the pain. Tom was relentless and tireless when playing. He truly didn’t understand what it meant to give up. This is a defining trait that drove him and helped him overcome huge obstacles to put himself through college and law school. He was also intelligent, intuitive, and creative as a player. Hard work can only get you so far, his intellect and ability to imagine every possible outcome were what catapulted him to the top of his field as a defense lawyer. Tom continued to play in the Cleveland Metro League after college until he was forced to stop after having to have one of his heart valves replaced in the mid 90’s. But, he remained a passionate Bayern fan and absolutely loved rooting for the German National Team in the World Cup. He was so looking forward to attending World Cup games hosted on home soil in four years. Sadly, his love affair with the beautiful game was ended way too soon.” ALL SERVICES SATURDAY MAY 21, 2022. VISITATION SATURDAY 9:30AM-10AM with a Funeral Mass to begin at 10AM at Our Lady of Grace Church, Hinckley. Interment Hope Memorial Gardens.

Thomas Rein, age 58 passed away May 6, 2022. Loving father of Alex and Ashley Rein. Brother of Christopher Rein and Christine Pickens. Uncle of Angelica, Elijah, Gabriella and Noah. Beloved friend and companion to Kathy. He is preceded in death... View Obituary & Service Information

The family of Thomas Rein created this Life Tributes page to make it easy to share your memories.

Send flowers to the Rein family.