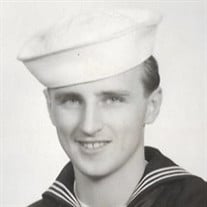 Thomas James Nichols, beloved husband of Evelyn (Jones) for 65 years. Proud father of Thomas (Connie), John (Jeannine), Mary Brondfield (Howard), Charles (Sharon), Joseph and Maureen Wagner (Dr. Philip). The joy of his life were his grandchildren: Russel, Alan, Steven, Eric, Joseph, John, Jacqueline, Margaret, Kelly, Thomas, Theodore, Andrew, and David. He was also a beloved Uncle to many. Thomas was born on November 26, 1929 in Pawtucket, Rhode Island. He was the fifth child of Albert and Alice (O’Brien), both of whom were WWI veterans. Thomas graduated from East High School in Pawtucket, RI, North Eastern University in MA, Bryant University in RI, and the New England Institute of Technology in RI. Thomas was a decorated Korean War Veteran while serving in the U.S. Navy from 1950 to 1954. He was deployed to Pusan aboard the U.S.S. Missouri B.B.63, and also served on the U.S.S. Monrovia A.P.A. 31, he saw service in 24 countries as a member of the Elite Fleet Marine Force. Thomas was a member of the American Legion Brunswick Chapter, Korean War Veterans Chapter 69, and Strongsville V.F.W. Post 3345 for over 60 years. Thomas was transferred from R.I. to Cleveland to oversee the cost management on the VA hospital building in Brecksville in 1958. Thomas was employed for over 33 years at M.T.D. Products where he was Corporate Manager of Industrial and Cost Engineering. He over saw these operations for 14 plants in the U.S. and Canada. After retiring, he enrolled in the Cleveland Marshall Law School and did private consulting for U.S. and Canadian companies. Thomas was a senior member of the Industrial and Cost Engineering Society. While serving in Rome, Italy during the war, Thomas had a private meeting with Pope Pius XII (1952) who blessed him by making the sign of the cross on Thomas’ forehead and giving him a Papal Blessing. Thomas and Evelyn contributed to the re-building of Saint Joseph Church in 1963 and are founding members of Saint John Neumann Parish in Strongsville. Calling hours are Monday Aug. 31 from 5-8 at Jardine Funeral Home, Strongsville. Funeral Mass Tuesday September 1st 10:00am at St John Neumann in Strongsville. Burial will take place immediately following at Western Reserve National Cemetery in Rittman. Donations can be made to Thomas P. Perciak Family Residential Hospice of Strongsville or the charity of your choice.

The family of Thomas James Nichols Sr. created this Life Tributes page to make it easy to share your memories.

Send flowers to the Nichols family.