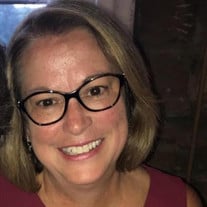 Tammy Jo Langhals (nee Parker) was a caring wife, mother, grandmother, daughter, sister and friend. She left this world suddenly on May 10, 2022 at age 58. She leaves behind Alan, her beloved husband of 32 years; children Ashley Clinthorne (Jonathan), Paige Langhals-Totino (Nathan) and Nathaniel Langhals (Julie); parents Nancy Whitney (Robert) and Roger Parker (Tina), grandchildren Grayson and Sienna Totino as well as numerous nieces and nephews. She was preceded in death by her brother, Kent Parker. After retiring from a career as a Data Analyst at NASA, she became an avid traveler. She began traveling across the country to watch her children enjoy their favorite sports and as her passion for travel grew, she and Al travelled extensively. Among Tammy’s favorite places were Hawaii, Zion National Park, Germany, Italy, Portugal, and France. These adventures ultimately led them to Norris Lake where Tammy fell in love with the water and mountains, fully embracing the lake life! Outside her love of travel, Tammy enjoyed spending her time with friends and family. She became best known as Gigi to Grayson and Sienna and never shied away from a game night with friends. We will honor Tammy with Memorial Services Saturday May 14, 2022. Visitation 12-3PM at Jardine Funeral Home, 15822 Pearl Rd, Strongsville followed by a private gathering. In lieu of flowers, memorial contributions may be made to Kidney Foundation of Ohio, ATTN: Development Department, Kidney Foundation of Ohio, 2831 Prospect Avenue Cleveland, Ohio 44115.

The family of Tammy Jo Langhals created this Life Tributes page to make it easy to share your memories.

Send flowers to the Langhals family.