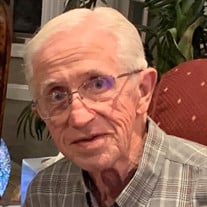 Ronald Andrew Zivcsak, 79, passed away on February 22, 2022 in Strongsville, Ohio. He was born in Cleveland, Ohio on July 16th, 1942 to his late father Andrew Zivcsak and mother Clara Zivcsak (nee Brodie). Ron is preceded in death by his sister Dorothy Simon. ​Ron is survived by his wife of 58 yrs, Diane “Charlie” (Demma) Zivcsak. Additionally, he is survived by his children Ron (Lynn) Zivcsak of Medina, Renee (Mark) Pleasnick of Columbus, Rich (Joyce) Zivcsak of Olmsted Township, and Robin (Jim) Scheff of Perrysburg; grandchildren Brittney (Spencer) Smith, Anthony, and Macey Zivcsak, Melissa, Miriam, Mary Pleasnick, Hannah (Joel) Varner, Chase Zivcsak, James, Owen, and Sawyer Scheff, and his beloved dogs, Little Bit and Mango. Ron graduated from John Carroll University in 1964 and received his MBA from Baldwin Wallace University in 1992. Ron spent his 44-year sales career with ADT as a District General Sales Manager earning the 100% Club Award over 30 times. No matter the season, Ron could be found enjoying a beer or scotch while rooting for Cleveland sports teams (“Hear we go Brownies”) and was an active golfer. His summer routine included cutting the grass while listening to Dean Martin and Willie Nelson. Ron’s family has very fond memories of vacations at Salt Fork State Park and playing bocce ball in the backyard. Known to his grandchildren as “Papa”, they will always remember playing foosball and dominos with him. Ron was also an active member of the Strongsville Rotary and Kiwanis clubs. A Memorial Mass will be held at St. John Neumann Catholic Church in Strongsville, OH on March 19th. Family & friends will be received from 10-11am, followed by Mass at 11am. A celebration of Ron’s life will be held at Mapleside Lodge in Brunswick, OH from 12:30-3:30pm. Contributions can be sent to the Strongsville Rotary Club, or Sacred Heart Catholic Church in Wichita Falls, Texas. “Pass to the right.”

Ronald Andrew Zivcsak, 79, passed away on February 22, 2022 in Strongsville, Ohio. He was born in Cleveland, Ohio on July 16th, 1942 to his late father Andrew Zivcsak and mother Clara Zivcsak (nee Brodie). Ron is preceded in death by his sister... View Obituary & Service Information

The family of Ronald Andrew Zivcsak created this Life Tributes page to make it easy to share your memories.

Send flowers to the Zivcsak family.