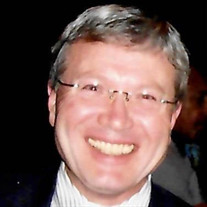 Robert “Bob” Hall, aged 68, passed away June 26, 2021 after a six year battle with Parkinson's Disease. Bob was born in Youngstown, Ohio to Robert N Hall and Mary Alice Hall (nee Sharkey). After his father passed away when Bob was young, he and his younger sister Maureen were raised in Girard, Ohio with the help of extended family. Bob was especially close to his Uncle William “Bill” Sharkey, who helped to raise him. After earning Bachelor’s and Master’s degrees in electrical engineering from Youngstown State University, Bob was an engineer at Nordson Corporation in their automotive group for over 35 years. Holding multiple patents for his work (4987854, 5065695, 5687092, and 5995909), he had opportunities to travel domestically and internationally, including Germany, Japan, Sweden, and Switzerland. Even after retiring, Bob enjoyed attending Nordson’s patent dinners and other work functions. Bob married Linda “Lin” Hall (nee Young), originally from North Royalton, with whom he raised two sons. A longtime resident of Strongsville, he was active in the Strongsville School system, including helping to form the first Strongsville Ice Hockey teams. A life-long Cleveland sports fan, Bob fondly talked about his trips to Cleveland Municipal Stadium with his Uncle Bill to watch the Cleveland Browns when he was young, even seeing Jim Brown play. Later in life, he took his family to many Cleveland Indians games and snowy late-season Cleveland Browns games. An avid car enthusiast, he enjoyed car shows and attending motorsport races at Mid-Ohio when time allowed. As both his sons played ice hockey, he learned the game and became an avid fan. Bob had an infectious laugh and particularly enjoyed slapstick humor. He will be fondly remembered at Christmas time for his love of National Lampoon’s Christmas Vacation. He is survived by his wife Lin Hall of 40 years; sons Rob Hall (Abby) and Jeff Hall (Camille); and sister Maureen Hall. ALL SERVICES PRIVATE. In lieu of flowers, memorial contributions may be made to Berea Animal Rescue, https://www.bereaanimalrescue.com/.

The family of Robert "Bob" Hall created this Life Tributes page to make it easy to share your memories.

Send flowers to the Hall family.