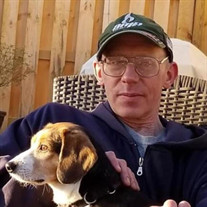 Robert Bruce Colville August 15, 1966 – March 25, 2020 “I Did It My Way” The Riddle, Answered: Celebrating the Life of Robert Bruce Colville There was a man back in '95 Whose heart ran out of summers But before he died, I asked him Wait, what's the sense in life … --John Ondrasik Robert Bruce Colville (Rob) passed away unexpectedly on Wednesday, March 25, 2020, of cardiac arrest. Preceded in death by his parents, Robert John Colville and Barbara Jean (Lowe) Colville. Surviving to mourn his loss and to celebrate his life and memory are his sister, Beth Ann (Andy) Jewell; beloved niece and nephews, Meghan Aubrey Shillington, Ethan Francis Shillington, and Raymond Andrew Jewell; great-nephew Coral Perry Egret; cherished aunt, Gail Lowe; cherished uncle, Dick Lowe; many cousins; dear friends and neighbors; and Harvey the cat. Rob graduated from the University of Akron with a bachelor’s degree in Mechanical Engineering and a master’s degree in Business Administration. Rob’s work took him to Greenville, South Carolina, and to Oak Ridge, Tennessee, before returning to live in his hometown of Strongsville, Ohio. Rob worked in the automotive and banking industries and his true vocational passion was that of investing, a passion he inherited from his father. Throughout his life, Rob was athletically and musically gifted, talents coveted by his sister. As a child, Rob excelled in baseball as a pitcher and hitter. Rob was a lifelong bowler and tennis player and an avid bicycle rider and distance runner. In his later years, Rob developed a passion for gardening and enjoyed cultivating his urban farm, where his crops ranged from strawberries, tomatoes and peppers to pumpkins, gourds and sweet corn. Rob’s favorite flower was the marigold, which he planted in abundance at his home and, later, at Beth’s. Rob lovingly cared for his beloved mother, Barbara, in her later years and was with her when she passed away in 2017 at the age of 90. Following their mom’s death, Rob and his sister, Beth, became very close and had great conversations and hilarious, unforgettable adventures in home repair, shopping, and gardening; attending Cleveland Indians and Washington Nationals baseball games; and drinking Green Hat Gin. They continued their childhood table tennis rivalry, and Rob helped Beth select the perfect ping-pong table for his nephew Ray’s fourteenth birthday. We are deeply saddened by Rob’s sudden passing, and yet incredibly grateful for the time we spent together. Thank you, Rob, for your life gave me the answer to The Riddle. May you rest in peace and remain in my heart forever. A Reading by Henry Scott-Holland Death is nothing at all. It does not count. I have only slipped away into the next room. Nothing has happened. Everything remains exactly as it was. I am I, and you are you, and the old life that we lived so fondly together is untouched, unchanged. Whatever we were to each other, that we are still. Call me by the old familiar name. Speak of me in the easy way which you always used. Put no difference in your tone. Wear no forced air of solemnity or sorrow. Laugh as we always laughed at the little jokes that we enjoyed together. Play, smile, think of me, pray for me. Let my name be ever the household word that it always was. Let it be spoken without an effort, without the ghost of a shadow upon it. Life means all that it ever meant. It is the same as it ever was. There is absolute and unbroken continuity. What is this death but a negligible accident? Why should I be out of mind because I am out of sight? I am but waiting for you, for an interval, somewhere very near, just around the corner. All is well. Nothing is hurt; nothing is lost. One brief moment and all will be as it was before. How we shall laugh at the trouble of parting when we meet again! A Playlist for Robert Bruce Colville, 1966-2020 The Riddle — Five for Fighting The End of the Innocence— Don Henley The Trouble with the Trees — Rush Yesterday — The Beatles (Paul McCartney & John Lennon) My Way — Frank Sinatra Ring of Fire — Johnny Cash I’ll Fly Away – Alison Krauss Angel Flying Too Close to the Ground — Willie Nelson Country Roads — John Denver The Year of the Cat — Al Stewart Down Under — Men at Work Come Dancing— The Kinks Margaritaville — Jimmy Buffett Tom Sawyer -- Rush Rock of Ages -- Def Leppard Who Can It Be Now -- Men at Work Photograph -- Def Leppard Subdivisions -- Rush The Gambler -- Kenny Rogers Matthew ("Riding on My Daddy's Shoulders Song") -- John Denver 500 Miles -- the Kingston Trio Cum On Feel the Noize – Quiet Riot Bang Your Head (Metal Health) – Quiet Riot Where Have All the Flowers Gone? — the Kingston Trio A Reading From The Book of Ecclesiastes, Chapter 3, v. 1-8 (King James Version) 3 To every thing there is a season, and a time to every purpose under the heaven: 2 A time to be born, and a time to die; a time to plant, and a time to pluck up that which is planted; 3 A time to kill, and a time to heal; a time to break down, and a time to build up; 4 A time to weep, and a time to laugh; a time to mourn, and a time to dance; 5 A time to cast away stones, and a time to gather stones together; a time to embrace, and a time to refrain from embracing; 6 A time to get, and a time to lose; a time to keep, and a time to cast away; 7 A time to rend, and a time to sew; a time to keep silence, and a time to speak; 8 A time to love, and a time to hate; a time of war, and a time of peace. "The family suggests donations in Rob's memory to the Cleveland (OH) Animal Protective League (Cleveland APL) https://clevelandapl.org/donate/, or to a humane society of your choice. A Celebration of Life will be held at a later date."

The family of Robert Bruce Colville created this Life Tributes page to make it easy to share your memories.

Send flowers to the Colville family.