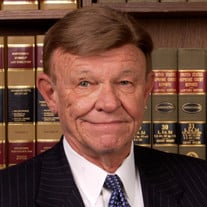 Robert Patrick Baughman (Pat) passed away unexpectedly on Feb. 6, 2022 after a brief hospitalization for pneumonia (not COVID). He was born on November 18, 1938 in Zanesville, Ohio. His parents were Robert George Baughman and Katheryn Aler Baughman. He grew up in Columbus, Ohio where he attended North High School and received his Bachelor’s Degree from Ohio State University in 1960. He was a member of the Navy ROTC. He earned his law degree (J.D.) from Ohio State University in 1962, while his wife, Joyce, taught school. He practiced law in Cincinnati and Cleveland before being appointed Assistant Attorney General of Ohio. He then joined Jones Day in Cleveland before he opened his own law firm, Baughman and Associates, at 55 Public Square in Cleveland, specializing in national class-action defense law. He was an active member of the Maritime Law Association and the National Council of Self-Insurers. He was an avid reader and researcher, who thrived on solving intellectual and DIY challenges. He had many hobbies including electronics, woodworking, technology, and assembling Heath Kits. Later, he programmed one of the earliest computers that was available. He had a private pilot’s license and enjoyed flying. He loved boating and was a member of Lakeside Yacht Club. He was a golf enthusiast and member of Columbia Hills Country Club. His family has pleasant memories of his taking his daughter for motorcycle rides in the evenings. He loved photography, and he and his wife took a photo safari to Africa. He traveled extensively to meet his goal of showing his daughter the world while she grew up. He is survived by his loving wife of 62 years, Joyce, his daughter, Patricia, and her godson, Oliver Dougherty. He is also survived by his brother Dr. Thomas Baughman (Lee Ann), and nieces Mindy Baughman and Pamela Baughman, and her children, Kaya and Sky Grumbles. The family will hold a private memorial. Arrangements by Jardine Funeral Home, www.jardinefh.com. Patrick was a life-long learner and, in lieu of flowers, the family gratefully requests donations to support his grandson's public school. The link follows for Morris Brandon Elem. (Oliver Dougherty grade 2 – Mrs. Fellows' class). https://app.etapestry.com/onlineforms/MorrisBrandonElementarySchool/2018beefund.html

Robert Patrick Baughman (Pat) passed away unexpectedly on Feb. 6, 2022 after a brief hospitalization for pneumonia (not COVID). He was born on November 18, 1938 in Zanesville, Ohio. His parents were Robert George Baughman and Katheryn Aler... View Obituary & Service Information

The family of Robert Patrick Baughman created this Life Tributes page to make it easy to share your memories.

Send flowers to the Baughman family.