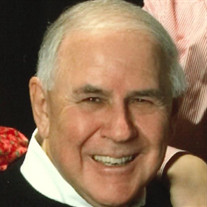 RICHARD ALLEN “DICK” SCHNATERBECK of Strongsville, Ohio, passed away at the age of 87 on September 5, 2021 in his hometown. He was born in 1934 to Marie and Adam Schnaterbeck in Cleveland, Ohio. Richard was the beloved husband to Audrie (nee Notarianni) Schnaterbeck, loving father of R. Conley (Sharon) and Heidi Booth (Scott), cherished “Papa” to George and Brian, and endearing “Poppie” to Hannah, Gabrielle, and Madelyn, dear brother of the late Carol Serbin, friend to his brother-in-laws and sister-in-laws, and caring uncle of many. Richard was the co-founder and president of steel company Fay Industries for 34 years and the embodiment that hard work and compassion can go hand-in-hand. He found true joy by bringing joy to others, a philosophy that guided him throughout his life and career. He shared his success by donating to countless charities, often without recognition, and supporting the arts in his beloved Northeast Ohio. A leader even in his childhood, Richard always sought to give back to his community. Whether it was by organizing neighborhood baseball games and trips to the dance halls or by planting Victory Gardens throughout his town during World War II, he instilled hope and happiness in everyone he touched. It was during these early years that he met the love of his life Audrie; it was no surprise that walks home from school turned into a walk down the aisle in 1955 and their love endured 66 years later. Richard attended Baldwin Wallace College where he forged enduring bonds with his fraternity brothers and afterwards proudly served his country in the US army. An art enthusiast, Richard was passionate about creating; his paintings and sculptures adorned living rooms and galleries across Ohio, including his submission to the Cleveland Museum of Modern Art’s “May Show.” He would always share his passion with those around him, and could often be found volunteering at local art fairs or welcoming all to painting parties in his garage studio. To Richard, “the noblest art is that of making others happy.” Richard also became an avid golfer and thoroughly enjoyed his time as a charter member of Sharon Golf Club in Ohio, though he was happiest when inviting new and old friends to join him. A game of golf with “Dickie” meant leaving with a full heart and a full bag of cookies from the clubhouse. He will be greatly missed by those who were fortunate enough to know him. Catholic Mass to be on Monday, September 13 at 11:00 at St Joseph Church, 12700 Pearl Road, Strongsville, followed by interment at Holy Cross Cemetery 14609 Brookpark Road, Brook Park.

RICHARD ALLEN &#8220;DICK&#8221; SCHNATERBECK of Strongsville, Ohio, passed away at the age of 87 on September 5, 2021 in his hometown. He was born in 1934 to Marie and Adam Schnaterbeck in Cleveland, Ohio. Richard was the beloved husband to... View Obituary & Service Information

The family of Richard Allen "Dick" Schnaterbeck created this Life Tributes page to make it easy to share your memories.

Send flowers to the Schnaterbeck family.