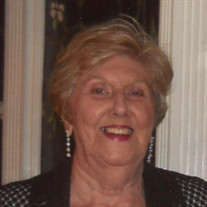 Phyllis Long (Serio) died peacefully on November 7th, 2021 at the age of 86.She was born on September 8, 1935 to Arthur and Elsie Serio. Three younger siblings followed and they lived on the south side of Cleveland. She graduated from South High School in 1953 along with a group of girls who knew her as ‘Toots’, with whom she maintained lifelong friendships. After high school, she attended the University of Miami in Florida and studied early childhood education. In June of 1958, she married Albert Long. They had two sons and after briefly living in Garfield Heights, they moved to Parma. She was active in the Women’s Auxiliary of the Northern Ohio Italian Club. She was a devoted mother and then grandmother, attending every sporting event, concert, recital, birthday party and graduation. She spent many days babysitting her grandchildren and taking them to every fun place that she could find or they wanted to go. She will be greatly missed by all of them, especially her four grandchildren. More recently, she had 6 great-grandchildren who knew her fondly as “GG”. In her later years, she spent lots of time driving herself and her friends to different events and meetings. Phyllis was never a stranger! Wherever she went, she always knew someone. She was a great cook and hostess and always insisted on hosting every holiday and family gathering. She and Al also attended many senior dances in various locations. Phyllis is survived by her husband of 63 years, Albert Long, Jr; three siblings, Arthur Serio, Jr and Roger Serio of Florida and Antoinette (Sue) Eliason; her two sons, Tony(Cyndee) and Scott (Jeanine); four grandchildren, Zakary, Evan (Olivia), Alexandra (Aaron Fogle) and Chelsea (Ross McIntosh); and her 6 great-grandchildren. Phyllis treasured her family above all else. In light of that, the family requests that in lieu of memorial donations or flowers, you spend some quality time with your family and loved ones. A celebration of Phyllis’s life is being planned for later.

Phyllis Long (Serio) died peacefully on November 7th, 2021 at the age of 86.She was born on September 8, 1935 to Arthur and Elsie Serio. Three younger siblings followed and they lived on the south side of Cleveland. She graduated from South... View Obituary & Service Information

The family of Phyllis Long created this Life Tributes page to make it easy to share your memories.

Send flowers to the Long family.