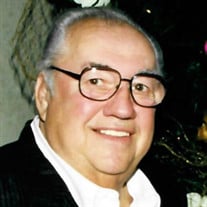 Philip E. Sustersic “Foozy”, age 94, of Strongsville, passed away peacefully at the Sandusky Ohio Veterans Home on Thursday January 27, 2022. Beloved husband of the late Betty (Regalbuto) and father of the late, ever so cherished Anna Louise. Loving father of Larry Smith, Laura Green, Sharon Torok, Evon Engelhaupt (Michael), Autumn Taylor, and late Mark Smith. He was a proud grandfather, great grandfather and great-great grandfather to many. Born April 29, 1927, Philip was the 9th of 10 children born into the loving and fiercely loyal Slovenian family of Jacob and Anna (Rot) Sustersic. He was preceded in death by his siblings, Jacob, Anna Zalar, Frank, Olga Komora, Christine, Joseph, Edward, and Josephine, survived by his sister Janet Guilliford. Beloved uncle of too many to name nieces and nephews – you know who you are and how much he cherished each and every one of you! A graduate of John Marshal High School, Philip proudly enlisted and served in the Merchant Marines during WWII. After discharge, he attended the University of Findlay but was drafted into the Army during the Korean War. Foozy’s carefree bachelor days ended when he fell in love with and married a pretty waitress named Betty, instantly becoming the father to her 6 children. Anna Louise arrived in 1963 to complete their family. He worked at the Cleveland Tank Plant until it closed, eventually retiring from the GM Lordstown plant. Phil and Betty were co-founders of Friends Forever in 1983, an organization committed to providing recreational, educational, and social activities for individuals with developmental disabilities. They enjoyed many years bowling, playing baseball, and participating in Special Olympics with Anna Louise, as well as forging strong friendships with the Friends Forever families. After retirement, Phil, Betty, and Anna Louise took to traveling. They loved visiting friends and family in Florida, traveled to California, Las Vegas and made several memorable trips to Branson, Missouri – Anna’s favorite. Though COVID-19 restricted visitations to OVH, sometimes for several months at a time, friends and family continued to visit Foozy as often as possible. He loved reminiscing. His recall and sharing of his life’s events were amazing at every visit. He will long be remembered as a big man with a big heart, a great sense of humor, a quick wit and a joke to share. He always had a twinkle in his eyes and a huge smile on his face. Family and friends are invited to attend a service at St. Joseph’s Church in Strongsville. Visitation will begin at 10AM with a Mass of Christian Burial at 11AM on Saturday, March 5, 2022. Everyone is invited to attend a luncheon following the mass at the Strongsville VFW Post 3345, 17900 Strongsville Blvd., where we will “eat, drink, and be merry” as Phil requests we do! He will be laid to perpetual rest at the Ohio Western Reserve National Cemetery on April 29, 2022 at 1:45PM. In lieu of flowers, donations can be made to Friends Forever, P.O. Box 30203, Middleburg Heights, Ohio 44130.

Philip E. Sustersic &#8220;Foozy&#8221;, age 94, of Strongsville, passed away peacefully at the Sandusky Ohio Veterans Home on Thursday January 27, 2022. Beloved husband of the late Betty (Regalbuto) and father of the late, ever so cherished... View Obituary & Service Information

The family of Philip E. Sustersic created this Life Tributes page to make it easy to share your memories.

Send flowers to the Sustersic family.