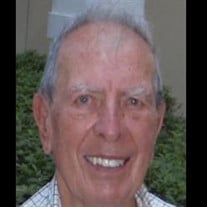 NORBERT DOERINGER, 90, of North Royalton, passed away on Saturday, November 23, 2019. Cherished husband of Alberta (nee Shaddock) for 59 years; loving father of Kathleen Gross, Laureen Krofft, Norbert (Carol), and Kimberly Begany (Phil); proud grandfather of Stephanie, Matthew, Heidi, Hans, Michael, and Nicholas; great grandfather of Dustin, Savannah, Zack, Alisa, Jim, Nathan, Nikolas,Morgan,Keira, Hunter and Samuel; great great grandfather of Emmett, Christopher and Jasmine. He is also survived by a large extended family. Norbert met his lifetime love, Alberta in Cleveland, Ohio. They had their first date at the skating rink and married in 1950 where they raised their family. A veteran, Norbert joined the army in 1951 and served in Korea for two years. Norbert had an adventurous spirit. In the late 70’s, he jumped on an opportunity to work in Spain. He moved his family to Valencia, where for four years, he worked as a project manager in a steel mill that supplied steel to Ford. Norbert did not speak Spanish prior to moving, but he soon learned the language. Upon returning to the United States, he continued to work in engineering, designing conveyor systems for disposal of nuclear radwaste. There was not much that Norbert could not build or fix. He installed a swimming pool, built an addition on his house, and maintained his vehicles with help from friends. But engineering and a knack for building and fixing were not his only talents. Norbert was also an accomplished pianist. He was very involved with our lives.and with our extended family. He encouraged and supported us to reach our potential. He taught us to honor and respect our Mother. He modeled integrity, dependability and to be there for others. He made a difference to any life he touched. Anybody who knew Norbert understood his family meant the world to him.

The family of Norbert Doeringer created this Life Tributes page to make it easy to share your memories.

NORBERT DOERINGER, 90, of North Royalton, passed away on Saturday,...

Send flowers to the Doeringer family.