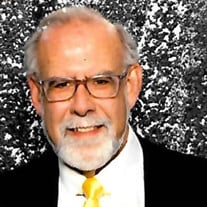 Michael “Mike” A Huonder, 68, of Strongsville, OH, and formerly Liverpool, NY, passed away suddenly after a long illness at University Hospital Seidman Cancer Center on Thursday, April 2, 2020 with his loving wife & daughter by his side. He is survived by his devoted wife Rita (Barone) of 40 years and his adoring daughter Michelle of Naples, FL. He is predeceased by his wonderful parents Harold (Bud) and Sophia (Gapski). He leaves behind beloved aunts, nieces, nephews, great-nieces, great-nephews, and cousins, especially David and Susan (Yennock) Senise, Mary Lynn (Benedetti) Dreer who introduced them, and an abundance of fabulous friends. All those who came in contact with him knew that his wife and daughter were the loves of his life. Everyone said, “He was one in a million!” and felt touched by his smile, kindness, generosity, integrity, passion, grace, and courage. He was loved by all. Michael had a strong passion for living that included sports, golf, travel, music, plays, concerts, and being the life of the party. Michael was a life resident of Liverpool, NY before moving to Strongsville, OH in 1997. He was a graduate of the 50th year CBA class of 1969 and LeMoyne College class of 1973 where he was a very involved alumnus. In 2017, he retired after 27 years with PPC where he was Director of National Accounts. During his tenure, he was an active member of SCTE for 11 years and was a Penn-Ohio Chapter volunteer in 2008 and 2009. After leaving PPC, Michael was instrumental in the creation of two companies – Parlay Communications and TraRi Technology, where he served as a Managing Partner. He put his lifelong sales expertise and knowledge to use as a guest lecturer for Syracuse University and Lorain County Community College in Elyria, OH. At a very early age, he was introduced by his father to Syracuse University football and thus began his love of sports. In the early 1970’s, he was a color commentator with Upstate Cable TV in North Syracuse, NY covering the SU football team. He was a season ticket holder for SU football and basketball for over 40 years. He was a member of the Hardwood Club for over 20 years and donated to the Orange Pack for over 10 years. He commuted countless times from Cleveland to Syracuse for the home games. While living in Cleveland, he was a season ticket holder for the Cleveland Indians, the Cleveland Cavaliers, and the Cleveland Browns ever since their return. He greatly enjoyed attending all their games and playoffs. He was particularly proud to say he attended Game 6 of the Cavaliers’ playoffs with his daughter which eventually led to their 2016 NBA Championship. The family would like to thank Michael’s dedicated doctors - Dr. Joseph Gibbons, Dr. David Ludwig, Dr. Matthew Cooney, Dr. Christopher Hoimes, Dr. David Bajor, Dr. Scott Fulton, and all the caring nurses at Seidman 4th Floor and Infusion Center Westlake. Since 2014, Michael had been an active member of the UH Seidman Cancer Center Leadership Council. During that time, he helped other people going through cancer by sharing his experiences and uplifting words of encouragement. Through sharing his story, he was able to help generate much-needed financial donations to the Seidman Cancer Center. In lieu of flowers, gifts in memory of Michael may be directed to UH Seidman Cancer Center Neuroendocrine Research, Institutional Relations and Development, PO Box 94554, Cleveland, OH 44101 – 4554 or by visiting www.UHGiving.org Michael was a communicate of St. John Neumann Roman Catholic Church in Strongsville, OH. Services and burial are planned for a future date to be determined. Arrangements are with Jardine Funeral Home, Strongsville, OH, and Farone and Sons, Inc. Funeral Home, Syracuse, NY.

Michael &#8220;Mike&#8221; A Huonder, 68, of Strongsville, OH, and formerly Liverpool, NY, passed away suddenly after a long illness at University Hospital Seidman Cancer Center on Thursday, April 2, 2020 with his loving wife & daughter by his... View Obituary & Service Information

The family of Michael "Mike" A Huonder created this Life Tributes page to make it easy to share your memories.

Send flowers to the Huonder family.