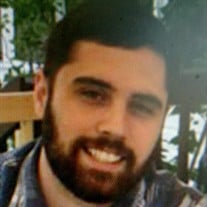 Matthew Joseph Haxton departed this world for peace in heaven on April 17, 2020. He is survived by his parents Kevin Haxton and Kathy Gainous Haxton, brother Michael Haxton (Jessica Skoien Haxton) and nephews Riley Josef and Parker Ross, Grandparents Robert and Nancy Gainous, Eileen Haxton and the late Orren Haxton (Mariann Rusinko Haxton), Aunts and Uncles, Doug Gainous (Stacy Vavrek Gainous), Tim Gainous (Nicole Palumbo Gainous), Mike Gainous (Lynn Stevens Gainous), Ron Gainous (Linda Ivey Gainous), Shawn Haxton, Todd Haxton (Maggie Little Haxton) and Eric Haxton (Julie Doyle Haxton) , and many cousins. Matthew Joseph Haxton brought joy and laughter into every room he walked into. He had a quiet kindness and gentleness about him since he was young. In his younger years, Matthew found joy in wrestling, as he had a natural talent and unique technical skills. Wrestling for South West Y Strongsville Mini Mustangs, St. Joseph & John and Strongsville High School with his brother, being coached by his father with his mom cheering in the stands, was a big part of Matthews upbringing and forging of lasting friendships. As a child, while attending Zellers, Mathew earned exemplary marks, and academics seemed to come easy to him. He continued to excel in his education at Albion Junior High and Strongsville High School earning his way into Ohio University. He graduated from the Russ Engineering College at OU growing into his own man. Matthew’s drive landed him a job as an engineer at SuperTrapp and then Pentair Water Group. He was a successful young man making his way through life. Matthew radiated warmth and love. Children were as drawn to him as he was to them. As an adult, he was always playing with or holding the youngest family members. Matthews' love for video games as a child grew into a hobby and a passion as an adult. Many family memories were made playing online with his brother Mike and nephews which connected a family who lived far away. Matthew loved to ride his motorcycle with close friends, attend family events, MMA events with his dad and enjoyed private dinners with his mom. Matthew’s wings were ready but our hearts were not. Matthew is loved deeply and his memory and love will live on through family and friends.

The family of Matthew Joseph Haxton created this Life Tributes page to make it easy to share your memories.

Matthew Joseph Haxton departed this world for peace in heaven...

Send flowers to the Haxton family.