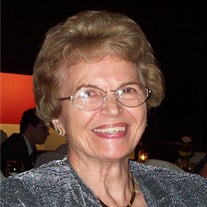 Maria Sieder (nee Klemencic), 92, passed away peacefully at home with her family, on June 10. Maria was born January 10, 1928 in Gottschee, Yugoslavia, now known as Kocevska, Slovenia. Maria and her family were forced to leave the region during WWII and settled in Rottenmann, Austria. Maria, her sister and two brothers came to America in early 1950’s and settled in Cleveland Ohio, where she met her husband Joe. They married in 1954 and raised their family in South Euclid, moving to Strongsville in 1975. Maria was a trained surgical nurse and worked at the Cleveland Clinic until the arrival of their first child, Susan. She stayed home raising their three children and was very active in the family owned businesses. She was a long time member of The Ladies Auxillary of the EOUV Club, an Austrian social club in Novelty, Ohio. Music and singing were a passion of hers and part of her identity. She was a member of a number of performing groups throughout her life. She and Joe were most proud of their grandchildren and supported them in all of their interests. Maria is preceded in death by her parents Franz and Rosalia, her husband of 66 years Joseph, sister Ida Huber, bothers Franz, Rudi, Alois and Edwin. She is survived by her children Susan, Heidi Morel (Mike) and Art (Sheila); grandsons Rob (fiance Deanna) and Dan Morel; Sam, Ben and Thomas Sieder; and brother Sepp. Visitation will precede Funeral Mass on Monday, June 15th from (10:00 am to 11:00am) with Funeral Mass following at 11:00am at Church of the Assumption, 9183 Broadview Road, Broadview Heights. The family asks that in lieu of flowers a memorial donation may be made to: Catholic Community Foundation, ATTN: Madelyn Zone, 1404 East Ninth Street, Cleveland OH 44114 or St. Stephen Church, 1930 W. 54th Street, Cleveland OH 44102.

Maria Sieder (nee Klemencic), 92, passed away peacefully at home with her family, on June 10. Maria was born January 10, 1928 in Gottschee, Yugoslavia, now known as Kocevska, Slovenia. Maria and her family were forced to leave the region during... View Obituary & Service Information

The family of Maria Sieder created this Life Tributes page to make it easy to share your memories.

Send flowers to the Sieder family.