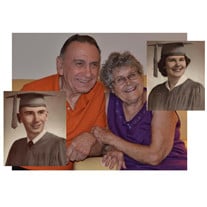 Luverne “Lu” Lowe (nee Payne), 86, passed away June 4, 2021. She is preceded in death by her loving husband of 64 years, Lewis “Bob” Lowe, 81, who passed away February 5, 2017. Devoted mother and father of Deborah S. Cochran (Tom), Pamela L. Poljak (Mark), and Bobbi K. McMurray (Mike). Bob is preceded in death by his brother, William "Bill" C. Lowe. Lu is the daughter of the late Verner R. and LuEmma B. Payne and Bob is the son of the late Ethel K. and Jesse O. Lowe. Proud Nana and Granddad of Lisa Wood, Richard Wood, Robert Coman Sproles and Megan Dlouhy. Great grandparents of seven. Lu was an only child, who grew up in the mountains of southern West Virginia (WV) with a large extended family living close by. Bob had one brother, and also grew up with a large extended family living nearby. Bob’s home town was just 11 miles from Lu’s, but they didn’t meet until their high school years when Lu invited Bob to go with her to a Sadie Hawkins' Day dance at their school. Bob claimed he was reluctant to go initially, but the first time he saw Lu he knew she was something special. They married in their senior year of high school and were inseparable until his death in 2017. In high school, Lu was active in sports and clubs. She worked in the school cafeteria as well as being a majorette. She thought of becoming a nurse but instead chose to become a stay-at-home Mom. Lu was the heart of the family, giving unwavering love and care to her children, grandchildren, and great grandchildren. Later in life, she was caregiver for her parents, Bob’s mother and for Bob who struggled for more than 30 years with Parkinson’s Disease. She was generous and loving, sweet and kind. In addition to this, she was a great seamstress who also taught herself upholstery, natural medicine, and ceramics. If there was anything she didn't know, she'd head to the library. Bob was also active in sports in high school. He played varsity football and basketball, but his real love was for basketball. He was a star player on both teams. Later in life, he discovered golf which he truly loved. Even when he could no longer play himself, he enjoyed watching tournaments and was proud of his golf visor autographed by Arnold Palmer. He was a hard worker, seeking odd jobs and working with his father. When the family home needed plumbing lines run, Bob was assigned the task and figured out the job without any instruction from his father. After graduation from high school, he and Lu moved to Detroit, Michigan where he worked in the Ajax Steel mill. Bob rose from those humble beginnings to become Vice President of Computer Operations for the National Geographic Society. Most of all, he loved his family, particularly having get-togethers with extended family. He always had time to play with the kids. He taught tomboy Pam how to throw a football and all of us how to ride bicycles. He played basketball with his grandson, Coman and would shoot a game of pool with anyone who would take him on. Bob and Lu are much loved and will be missed by many. ALL SERVICES PRIVATE. In lieu of flowers, memorial contributions may be made to Cypress Hospice, 2 Berea Commons, Suite 1, Berea, Ohio 44017.

The family of Luverne "Lu" Lowe created this Life Tributes page to make it easy to share your memories.

Send flowers to the Lowe family.