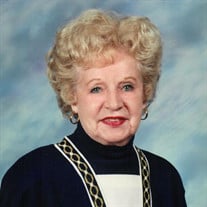 Nancy Kuhfeld was born Lova Miller on July 18, 1922 in Glasgow, Scotland to Margaret and Alex Miller. Nancy and her parents moved to the United States the day of the parade for Charles Lindbergh in 1927 at the age of 5. She was certain that the parade in New York City was for her! Nancy and her parents ultimately settled in Cleveland, Ohio where their sponsor was located. Once she became settled in school, Lova decided that she now wanted to be known as Nancy. She was in second grade and does not remember why she chose the name Nancy. Although she was known as Nancy for the rest of her life, she never legally changed her name. Nancy did remember doing all she could to lose her Scottish brogue and managed to do so at an early age. Nancy Miller became Nancy Sidley early in WWII when she married Edward Earl Sidley who was a sailor. She quickly became a citizen after learning she would not be allowed on a Navy base as a foreign national even if she was married to a US serviceman. Nancy and Ed settled in New York City as Ed shipped out of the Brooklyn Navy Yard. In the summer she lived in New York City and in the winter she lived on Long Island. She and Ed moved back and forth to beat the high cost of rent as prices on Long Island skyrocketed in the summers. After the war, Nancy settled back in the Cleveland area living in Lakewood, Vermilion, Parma, and Middleburg Heights. She held a variety of jobs in the areas of advertising, finance, and the secretarial fields until Ed's death in 1965. Nancy quickly found a new job at Sears where she worked in the auditing department until her retirement. Nancy was married to Harold Kuhfeld in 1969. She was most excited as she found Harold to be considerate, charming, a good dancer, and he had a nice head of hair! Nancy and Harold built a new home for themselves in Parma, Ohio where they lived for many years until they retired and moved to Strongsville, Ohio. Annual extended golf trips to Florida were one of their favorite things to do together along with their in-laws Walter (deceased) and Joan Kuhfeld. They also enjoyed volunteering at Playhouse Square in downtown Cleveland. They had an enjoyable, relaxing retirement together until Harold's death in 1999. Nancy's next move was to stay in retirement mode volunteering at Southwest General Hospital and traveling as this was something she found most enjoyable. North Africa, Arizona, Florida, Georgia, and Italy were among many places she visited. Nancy was fortunate to have three children Keith (Wanda), Karen (Dik) and Ron (Sue) and four grandchildren Keith Jr. aka Sid (Donna), Ryan, Kristin (Michael), and Wade (Kim), and four great grand children Allison, Caroline, Adalie and Mikaela that she enjoyed as time permitted since most of the family now lives out of town. For the past several years Nancy has been a resident of Paramount Senior Living in Middleburg Heights, Ohio. A private Celebration of Life will be held at a later date.

Nancy Kuhfeld was born Lova Miller on July 18, 1922 in Glasgow, Scotland to Margaret and Alex Miller. Nancy and her parents moved to the United States the day of the parade for Charles Lindbergh in 1927 at the age of 5. She was certain that... View Obituary & Service Information

The family of Lova "Nancy" Kuhfeld created this Life Tributes page to make it easy to share your memories.

Send flowers to the Kuhfeld family.