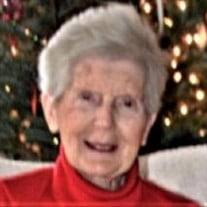 KATHLEEN S. “BILLIE” WILSON, 98, passed peacefully into her heavenly home on January 20, 2021, after a life well and fully lived. Family and close friends are invited to a visitation at St. Joseph Church (12700 Pearl Road, Strongsville) on Friday, January 29th at 10:00 a.m., followed by the Mass of the Resurrection at 11:00 a.m., and interment at Holy Cross Cemetery immediately following. Masks and social distancing are required. In lieu of flowers, donations are suggested to The Cleveland Food Bank (greaterclevelandfoodbank.org). Kathleen was born on April 15, 1922 in St. Paul, Minnesota to farmer Raymond K. Shoemaker and dressmaker Agnes Helbling. Kathleen’s parents and older siblings Agnes and Raymond doted on the baby of the family, who was born with a cataract in her right eye requiring four surgeries and resulting in near-blindness in that eye for the rest of her life. Kathleen attended a one room schoolhouse for grammar school, and at age 9, proclaimed herself “Billie” to reflect her tomboyish tendencies, and spent her designated study time drawing horses. Billie and Agnes roomed together during Billie’s first two years at St. Joseph’s Academy for Girls in St. Paul, returning to their 300 acre Minnesota farm on the weekends and school breaks. Their parents struggled as crops failed and the Dust Bowl of the Great Depression years devastated Midwestern farmers. As a result, the Shoemaker family moved to a new farm in Kirkwood, Pennsylvania before Billie’s junior year of high school. Because there was no school nearby, Billie attended junior year in Wilmington, Delaware. She returned to St. Joseph’s for her senior year, and because of her exemplary high school scholastic achievements, she was awarded a four year scholarship to the College of St. Catherine in St. Paul, where she earned a Bachelor of Science in Dietetics and graduated summa cum laude. Billie went on to additional training at John Hopkins Hospital in Baltimore, Maryland, and Valley Forge Hospital in Phoenixville, Pennsylvania. She enlisted in the US Army in October 1944, and while completing her Army Nurse Corps basic training at Fort Meade, Maryland, Billie met tall, dark and very handsome Second Lieutenant Lawrence (Larry) Wilson when he was confined to the hospital due to an elbow injury. When Billie left six weeks later for her assignment as Second Lieutenant supervising dietician in the army hospital at Fort Benning, Georgia, their lifelong love was already cast in stone. They took a brief leave to marry on April 16, 1945, and then returned to their respective posts to complete their enlistments – Billie’s ending in October 1945 and Larry’s in May 1946. What started as a whirlwind courtship lasted until Larry’s death 65 years later. Billie and Larry were the loving, devoted, and faith-filled parents of Joe (Patty Koch), Larry (Arlene Ryan and the late Joanne), Kathy Madis (Garry), Peggy (deceased), Mary Jo Hanna, Ray (deceased) (Helen), John (Grace), Mark (Lisa), Theresa Andrews (Robby), Bernadette Wesolowski (Piotr), and Roseanne Condrich (Terry). Billie willingly traded her younger dreams of a career in dietetics to raise and guide her children. She and Larry also cherished their 41 grandchildren: Bridgette Joyce (Tim), Patrick (Pam), Sara Baumgarnter (Jason), Mary Wheelock (Ben), Dan (Kendra Freeman), Garry Madis (Kim), Shawn Madis (Catherine), Marissa Madis, Melissa Hanna, Tiffany Hanna, Dustin Hanna (Gabrielle), Rachel Pakzadeh (Benny), Emily, Rebecca Humphrey (Rob), Caroline, Tom (Frances), Joe, Dan, Claire, Jack, Alexandra, Gabby, Brian Andrews (Rachel), Sean Andrews (Teresa Walsh), Marianna Wesolowski, Sam Condrich, Abraham Condrich and Isaac Condrich. Billie and Larry also delighted in their 14 great-grandchildren Dalton, Alyson, Shaye & Fallon Joyce, Sam & Max Wheelock, Shannon Kelly, Jacob & Carson Madis, Zoe & Maya Hanna, Ruby & Roxy Pakzadeh, and Aidan Andrews. Billie instilled and reinforced her faith by setting an example of devotion and steadfast belief for her children, grandchildren and great-grandchildren. Her rigorous prayer routine, including serving in the St. Joseph prayer ministry until her final days, anchored her through life’s tragedies, including the loss of her beloved children Peggy and Ray and daughter-in-law Joanne. Even with Billie’s encompassing faith and love for her expansive “brood”, there was still room in her heart for her enduring passion for horses. Starting with the farm draft horses that she rode when her legs were barely long enough to straddle their wide backs, she made do with the necessities in order to always have at least one horse – and usually several – in her family. Billie founded the North Royalton Happy Hoofbeats 4H club in order to impart her love and knowledge of horses to other enthusiasts, and garnered lasting human friendships as a result. She also loved to dance, and her children were enthralled to watch her twirling in her beloved Larry’s arms until late in life. Billie was also very adventurous – a favorite family story is when her doctor refused to believe that her knee injury, at age 70, was caused by a waterskiing fall. Yes – a life well and fully lived, and a light that will live on in the family and friends that adored her.

The family of Kathleen S. "Billie" Wilson created this Life Tributes page to make it easy to share your memories.

Send flowers to the Wilson family.