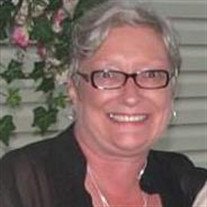 Julia (Jules) M Stough, age 62, of Strongsville, Ohio died unexpectedly Thursday, October 17, 2019. She was born February 22, 1957 to the late Raymond F. and Harriet (Deibel) Boyden. Julia was raised in Junction City, Ohio and graduated from New Lexington High School in 1975. She was a graduate of Capital University. Julia was a loving stepmother to Kevin (Kelly) Stough & Andy (Wendy) Stough, whom she greatly adored. She was a member of St. John Neumann Catholic Church, Strongsville, Ohio. Julia worked as an Admission Director for Cleveland Institute of Dental-Medical Assistants, Inc., for over 22 years. After the closing of the school, she was employed by Kemper House (Alzheimer's and Dementia Care) before her retirement. Julia was a guiding light to family, friends and co-workers throughout her life. She was admired for her ability to lift the spirits of those in need by giving of herself, her time and energy to do what she believed to be God's will and in His service. Her vibrant spirit and sense of humor lit up every room she entered. The wealth of memories we shared with her will forever be in our hearts. Julia is survived by her stepsons: Kevin (Kelly) Stough & Andy (Wendy)Stough; siblings: Daniel (Sharon) Boyden, David (Melly) Boyden, Anne (Francis) Brown, Mary (Dick) Saegert, John (Judy) Boyden, Patricia Thorne, Catherine (Dean) Dickson, Stephen (Sheree) Boyden, Thomas Boyden and Elizabeth (Jeff Dutiel) Boyden. Sister-in-laws: Roswitha Boyden, Pirom Boyden, & Janice Stough; step-grandchildren: Nathan & Brynn Stough; also, numerous nieces, nephews and cousins. In addition to her parents, she is preceded in death by her daughter: Cecilia Renee; her first husband: Eddie Ransom Hall; her second husband: Robert (Bob) J Stough; brothers: Michael P. Boyden, Paul A. Boyden, and Raymond F. Boyden, Jr. Cremation has taken place. A memorial mass-service and celebration of Julia's life will be held at: 11:00 a.m. Saturday, November 9, 2019 at St. Patrick's Catholic Church located at: 1170 State Route 668 S., Junction City, OH 43748. A post service reception will be given in honor of Julia at St. Rose Community Center located at: 120 North High St, New Lexington, OH 43764. In lieu of flowers a memorial contribution in Julia's honor may be made to any organization of your choice. To sign an online guest book please visit: www.jardinefh.com (Strongsville Ohio)

The family of Julia Marie Stough created this Life Tributes page to make it easy to share your memories.

Send flowers to the Stough family.