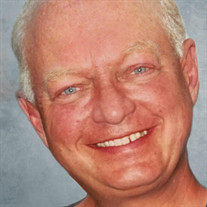 John (Jack) Wojciehowski age 75, passed away November 7, 2021. Beloved husband of 43 years to Jackie (nee Dale) Wojciehowski. Loving father of Jocelyn and Darren. Cherished brother of Gary (Nancy) Wojciehowski. He is preceded in death by his parents Roman J. & Margaret E. Wojciehowski (nee Whiteman). Visitation will be Saturday November 13, 2021 from 12-2PM at First Lutheran Church 19419 Royalton Road, Strongsville, OH 44149 with a memorial service to immediately follow at 2PM. Jack attended Holy Family after the family moved from Ann Arbor, Michigan to North Royalton, Ohio. He graduated from St. Ignatius High School in 1964 where he played football, baseball, and intramural basketball. He was educated for 2.5 years at the University of Dayton and received an associate degree from Cuyahoga Community College. He earned a BA degree from Cleveland State University in 1970. His long career in sales included working for over 13 years as a sales executive for American Greetings Corporation, where he achieved success securing contracts from businesses such as UPS, CVS, BP, etc. - just to name a few. Jack had a love for all sports, especially the Cleveland Browns and the Cleveland Indians where he and his wife, Jackie, were season ticket holders. Jack remained active with his classmates from St. Ignatius, attending many functions and present on the side-lines at the St. Ignatius football games. Jack played baseball, softball, and then took up golf. He has played many golf courses around the USA, his highlight being able to play internationally at Perranporth in Cornwall, the United Kingdom. Jack took the family on many adventurous and fun vacations, from sight-seeing to France to viewing the Mayan Ruins in Mexico. Jack was a very generous man, always presenting people with gifts, maybe even a joke gift or two. HUGE doesn’t even begin to describe Jack’s personality. He was always the life of the party, always had the last word and would always have something to say. There are many stories to be told about Jack and his various adventures in his life, as many of his friends have been witness to. He’ll be missed by so many. Rest in peace, Jack. In lieu of flowers, memorial contributions may be made to First Lutheran Church of Strongsville 19419 Royalton Road, Strongsville, OH 44149. www.JardineFH.com

The family of John Wojciehowski created this Life Tributes page to make it easy to share your memories.

Send flowers to the Wojciehowski family.