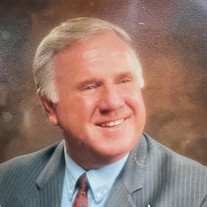 John Edward Lorz, died on Palm Sunday. He had just celebrated his 87th birthday three days before his passing, on April 7th. He was the second child of the late Ted and Eleanor Lorz. John’s wife of 50 years, Nancy Peters Lorz, died in 2013. John was a graduate of Cleveland Heights High School where his father taught French and German. He briefly attended the Ohio State University and was a graduate of Kent State University. While at Kent, John was a member of the Delta Upsilon Fraternity. He was also a veteran of the U.S. Army where he served as a chaplain’s assistant. John’s entire career was as a sales manager for the Campbell Soup Company. John, as a bass singer in the Cleveland Heights High School choir, toured and sang in ten different European countries in 1953. Later, he sang in the Cleveland Orchestra Chorus, appearing at Severance Hall as well as at Blossom Music Center. In retirement, John spent most of his time at his cabin (Waldhutte) near the Allegheny National Forest. Over the years, what started as a family get together blossomed into an annual October celebration with over 50 attendees – all men, thus the name of the event became known as “The Stag.” John’s travels included several trips to France visiting friends in Paris and Bordeaux. In 1996 he and his French and Japanese friends spent a month touring in Alaska. His many friends he made over his lifetime will miss him dearly, including Madeline Dusky, a lifelong family friend, and his Amish friends in Pennsylvania. In addition to his parents, he was preceded in death by his older sister, Marie Lorz Ellis. He is survived by his brother, Paul T. Lorz Jr.; and five nieces and nephews, Julie Ellis of Florida, Mathew Ellis of New Jersey, Paul Ellis of Virginia, and David and Kathleen Lorz of Ohio. VISITATION will be held on MONDAY, April 18th from 3 p.m.- 7p.m. at JARDINE FUNERAL HOME, 15822 Pearl Road, Strongsville, Ohio. MASS OF CHRISTIAN BURIAL will be held on TUESDAY, April 19 at 11:30 a.m. at ST. JOSEPH CATHOLIC CHURCH, 12700 Pearl Road, Strongsville, Ohio. Burial to follow at Strongsville Cemetery. Donations in John’s name may be made to The Memory Care Fund at Kemper House Strongsville, 10890 Prospect Road, Strongsville, Ohio 44149.

John Edward Lorz, died on Palm Sunday. He had just celebrated his 87th birthday three days before his passing, on April 7th. He was the second child of the late Ted and Eleanor Lorz. John&#8217;s wife of 50 years, Nancy Peters Lorz, died... View Obituary & Service Information

The family of John Edward Lorz created this Life Tributes page to make it easy to share your memories.

Send flowers to the Lorz family.