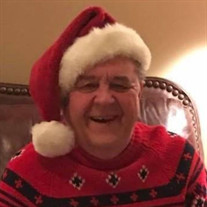 John M. Butchki “Jack” unexpectedly passed away February 8, 2021, after a brief battle with COVID-19. Loving partner of 4 years to Nancy Zurek. Cherished father of Laura Cirigliano-Bosworth (Brian) and Michael Butchki. Loving grandfather of Dante Cirigliano and Marco Cirigliano; step-grandfather of Emily and Julia Bosworth. John was a devout Catholic and a member of St. Josephs Church since he moved to Strongsville in 1971. Every person who ever met Jack would say he was the kindness, nicest, genuine man they have ever met. He preferred to be called Jack at a young age, was born in Marianna PA on Feb 12, 1943. His parents were John M. Butchki and Aurelia (Klena) Butchki. He was the eldest of 2 sons and survived losing his own father at the young age of 13. He and his mother cared for mentally challenged brother, Richard Butchki for many years while he was growing up. Richard, Dickey, as everyone called him, was the first person who needed Jack’s help. He took this compassion & kindness of caring for others into his entire life. Jack met his wife, Leona (Traversari) in high school, they were introduced by mutual friends and he fell in love instantly! He used to drive his light blue Chevrolet convertible 30 minutes to see Leona because she lived a few towns away in PA. In the 50’s this was a long distance! They eventually got married and he was drafted into the Army. They were re-located a couple of times, from Pennsylvania to Virginia. Jack was stationed in Thailand for most of his time serving in Vietnam War. After the War, he and his wife moved to Cleveland, Ohio and shortly after having their daughter moved to Strongsville, where Jack spent most of his life. He spent years of his life caring for others, friends, family, even strangers. He befriended those who needed help, almost as if he felt it was his duty to make others lives more enriched and happier. He was devoted to his grandsons so very much and the feelings were mutual. He never missed a moment from the day Dante and Marco were born. He was at both of their births; he was their first and most dedicated babysitter, he probably changed the most diapers 2nd only to their mom. Jack was a gentle, honest, and loving example that influenced the boys and contributed to their manners and kindness today. He attended every single academic event or accolade, every sporting event, every milestone with the biggest smile and some tears of joy every time! The pride of his grandsons beamed from him every time he was with them, even when Dante would mess up his hair! He made us laugh soooo incredibly much over the years with his mannerisms and quotes. His quotes include, “Jiminy Christmas, Ooh Krimeny, The first 100 years are the hardest, I’m still upright, (when someone asked how he was), Awe, shit! If something went wrong, lol~ , … Jack will be missed. We were all very blessed to have him in our lives. Mass of Christian Burial will be held Thursday February 25, 2021 11AM at St. Joseph Catholic Church 12700 Pearl Rd, Strongsville, OH 44136. Interment Ohio Western Reserve National Cemetery.

The family of John M. Butchki "Jack" created this Life Tributes page to make it easy to share your memories.