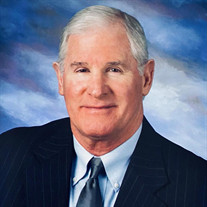 On Friday, September 24, 2021, James F. Dickerson, husband of 53 years and father of three children, passed away at the age of 79. Jim, as he was known to friends, was born on July 17, 1942, in Glendale, California, to John and Minnie Dickerson. Jim was their only child, and they resided in Arizona until Jim’s father John passed unexpectedly when Jim was seven years old. Jim and his mother then migrated to Ohio to be closer to her family. The two of them were very close, and she preceded him in death by exactly 23 years to the day. Jim grew up in Lakeside, Ohio, where he was a standout high school football and basketball player. He later attended the Ohio State University and joined the Phi Gamma Delta fraternity. After college, Jim went on to serve as a 2nd Lieutenant in the United States Army. He spent most of his enlisted time at Fort Meade, Maryland, where he worked in military intelligence during the Vietnam War. He later served in the military reserves at Camp Perry in Ohio. On November 25, 1967, Jim married Anne Elizabeth Taylor. Together they had three children, John, Lindsay, and Jane. Jim moved his young family to Strongsville, Ohio, in 1980, and lived out the duration of his years there. He served as a coach to many of his children’s athletic teams, and never missed any of their contests or events. Jim was well known around town as a gregarious and talkative fellow who was always quick with a joke. These traits helped him to excel in his work as an insurance agent for State Farm and Jim was proud to have served the company for over 50 years before retiring in 2019. Jim’s passion for Ohio State football was legendary. He was best known for his unique fan creations, including the Buckeye Darth Vader persona complete with a custom-made silver and striped helmet, and the painted fire hydrant on his street, meticulously dressed to appear in full uniform. In addition, Jim very much enjoyed watching his grandchildren’s sporting activities and playing golf. Jim was preceded in death by his father, John, and his mother, Minnie. He is survived by his wife Anne (Taylor), and his three children, John, Lindsay (Scott) Catanzarite, and Jane (Dan) Rogaliner. Jim was also grandfather to Noah Catanzarite (21), Makenna Dickerson (20), Joshua Catanzarite (19), Aidan Catanzarite (15), Jimmy Rogaliner (13), and Zach Rogaliner (10). Visitation will be held at Jardine Funeral Home, 15822 Pearl Road, in Strongsville, Ohio, 44136, Friday October 1, from 3-6 PM, with a memorial service to immediately follow at 6 PM. Interment private. In lieu of flowers, memorial contributions may be made to the Strongsville Food Bank, 13259 Pearl Road in Strongsville, Ohio, 44136.

On Friday, September 24, 2021, James F. Dickerson, husband of 53 years and father of three children, passed away at the age of 79. Jim, as he was known to friends, was born on July 17, 1942, in Glendale, California, to John and Minnie Dickerson.... View Obituary & Service Information

The family of James F. Dickerson created this Life Tributes page to make it easy to share your memories.

Send flowers to the Dickerson family.