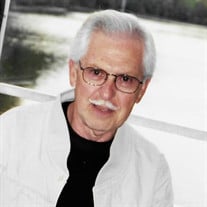 Jack Cantrell, 87, passed away June 15, 2020. Beloved husband of the late Alice Cantrell. Loving father of Larry Cantrell (Ann) and Rick Cantrell (Diane). Step-father of Daniel Murray, Scott Murray, and the late Teresa. Brother of Shirley Moore (Jim; deceased), Lorena Showalter (John; deceased), Walter Cantrell (Rosemary), Wanda Ammons (Larry), and the late Basil Cantrell (Vida; surviving), and Bill Cantrell. Dear grandfather of Jason (Cheryl), Tara (Chris), Derek (Diane), Jacob (Taylor), Carissa, Logan, Trent, Sarah, Justin, Andrew, and the late Eric. Great grandfather of Brandon, Alyssa, Chelsea, Brayson, and August. Great great-grandfather of Sophia and Chloe. Jack was born in Falling Rock, West Virginia on the family farm to Orville and Addie (nee Hill) Cantrell. He was raised in a loving extended family including grandparents. In his senior year, he had to move from the homestead to be closer to school. He worked the farm for an elder couple so as to complete his high school education. After graduation, he headed North to Cleveland to find work and make a home for his new family. He made a career at General Motors for 40 years. He was particularly proud of a home that he built where he acted as a general contractor. He was quite simply, a hard-working parent, good and decent human being, father, son, and friend. During COVID 19, we have elected to hold a Celebration of Life at a later date. However, if you wish to pay your respects, you can stop by the Strongsville clock tower, where the Cantrell family “brick” (Jack/Alice) is placed on the section of the walkway facing City Hall. Enjoy an ice cream at Mitchells on the square in remembrance of Jack. Or, you may visit his gravesite at the Strongsville Cemetery. In lieu of flowers, memorial contributions may be made to SW Hospice Fund, 18659 Drake Road, Strongsville, Ohio 44136.

The family of Jack Cantrell created this Life Tributes page to make it easy to share your memories.

Send flowers to the Cantrell family.