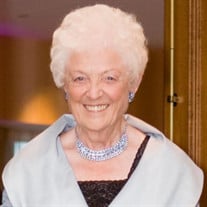 Ida Rose (Mertes) Eleck from Pompano Beach, Florida, passed away peacefully on Saturday, November 20, 2021. She was born on April 2, 1930 and was a long time resident of North Royalton. Ida was pre-deceased by her husband, Richard (Dick) B. Eleck in 1989. They raised three children: Richard Jr. Eleck (Elizabeth), Holly Michalke (Mark), and the late Cheryl (Sheri) Lynn Haas. Daughter of the late Francis and Katherine Mertes. Sister of Nicholas Mertes (Dorothy), and the late John (Jack) Mertes (Betty;deceased) and Eugene Mertes (Marilyn;deceased). Dear grandmother of Lauren Amanfoh (Eric), Katherine Eleck, Alison Michalke (fiancé Ian), Rhianna Eleck, and Mark Michalke. Great-grandmother of Aiden and Olivia. Ida and Dick founded Royalton Music Center in 1964 and later opened Brecksville Music Shoppe with Sheri as the manager. After Dick passed, Ida entrusted the legacy to Sheri while still staying involved as the bookkeeper and consultant. More recently, she became a resident of Florida and served as President of the Coastal Winds Condo Association for several years and was instrumental in the recovery efforts after both hurricanes Katrina and Wilma. In her youth, Ida served as President of the VFW Post 1974 Junior Auxiliary and was very actively involved with her mother, Katherine Mertes, catering for events at the post. Ida was a long-time parishioner and volunteer at St. Albert the Great Church and St. Gabriel in Pompano Beach, FL. She was also a very active and creative interior decorator and gardener. Ida was a wonderful mother, grandmother and great-grandmother. She had a deep love for children and relished visits from all of the kids. She was a mentor, advisor, and counselor to both her children and grandchildren; imparting wisdom, knowledge and insight that benefitted them in every way. She also loved dogs, from Tippy to Phoebe and a dozen or more in between, she always had a connection with each one of them. ALL SERVICES SATURDAY NOVEMBER 27, 2021. Visitation 9:30AM-10:30AM with a Mass of Christian Burial at 10:30AM at St. Joseph Catholic Church, 12700 Pearl Road, Strongsville. Interment North Royalton Cemetery. In lieu of flowers, memorial contributions may be made in Ida’s memory to Holy Family Hospice, 6706 State Road, Parma OH 44134.

Ida Rose (Mertes) Eleck from Pompano Beach, Florida, passed away peacefully on Saturday, November 20, 2021. She was born on April 2, 1930 and was a long time resident of North Royalton. Ida was pre-deceased by her husband, Richard (Dick) B.... View Obituary & Service Information

The family of Ida Rose Eleck created this Life Tributes page to make it easy to share your memories.

Send flowers to the Eleck family.