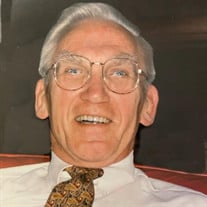 Herman Hann, 92, passed away on May 31, 2021, at the Western Reserve Masonic Community in Medina, OH. Herman was the beloved husband of Carol Joy Hann for almost 64 years. He also leaves behind daughter Jennifer Hann (Thomas Palmer) of Pittsburgh, PA, and son Charles (Donna) Hann of Medina, OH; grandchildren Nicholas and Aubrey Hann; step-grandchildren Evan Palmer and Molly (David) Keeling; and three great-granddaughters. Herman was born in Cleveland, OH, on May 30, 1929, to George and Anna (Hermann) Hann. He grew up in the Cleveland community of Transylvanian Saxons. As a child, he traveled to Europe to meet extended family and saw where his parents lived before immigrating to the U.S. In his teens, Herman learned the accordion and bass, and played local weddings, banquets, and dances with other musicians and his band, The Gay Time Trio. Herman attended Ohio University starting in 1948. He was a member of the Beta Theta Pi and Phi Mu Alpha Sinphonia fraternities and traveled to places throughout the U.S. with his college friends. After graduating from Ohio University in 1953, Herman attended Baldwin Wallace College the following year, where he met the beautiful Carol Howenstine. After college, Herman joined the Air Force, stationed first in Germany as an Air Force Police Officer. The AF gave Herman the opportunity to travel, and he visited England, the Netherlands, Egypt, and many U.S. landmarks. After his service, Herman returned to Cleveland. He married Carol on June 15, 1957. He began his career as a Vocal Music Teacher, later earning his Master’s degree from the University of Wisconsin and becoming a Guidance Counselor in the Cleveland Public Schools. Herman retired from education in 1987. Herman had a natural curiosity that fueled his many tastes and interests. He developed a deep appreciation for art, sculpture, and antiques, which he collected throughout his lifetime. Herman learned the stock market and became a savvy investor. He loved the outdoors, especially fishing and gardening. Herman and Carol were avid bridge players, and both shared an abiding love of music and song. Herman was optimistic and outgoing, and made friends wherever he went. He developed acquaintances with many of the artists whose work he admired and collected. From all the places he traveled and people he met, he collected many stories that he loved to share. In addition to Carol, Herman’s greatest love was for fatherhood. He shared his passions and many interests with his children, cultivating in them the curiosity and appreciation that he had for music, art, culture, commerce, and nature. Herman was gregarious and good-natured to the last. He sang to his caregivers and visitors. He spoke of his great good fortune and happy life, his devotion to Carol, and his endless love for his adoring family. He enriched our lives, and we will miss him every day. Visitation will take place at Jardine Funeral Home in Strongsville on June 12 from 2-3PM with a Memorial Service to begin at 3PM. In lieu of flowers, the family suggests memorial contributions to Crossroads Hospice (crhcr.org/donate/).

Herman Hann, 92, passed away on May 31, 2021, at the Western Reserve Masonic Community in Medina, OH. Herman was the beloved husband of Carol Joy Hann for almost 64 years. He also leaves behind daughter Jennifer Hann (Thomas Palmer) of Pittsburgh,... View Obituary & Service Information

The family of Herman Hann created this Life Tributes page to make it easy to share your memories.

Send flowers to the Hann family.