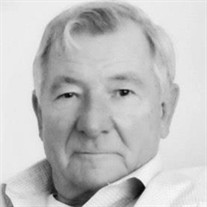 Heinrich Loos passed away on April 24, 2022, at the age of 88. He was born to a German-speaking family in Bikal, Hungary on December 26, 1933. When he was just ten years old, he left Hungary with his mother, brother, and grandparents because of the Second World War. Following the war’s conclusion, Heinrich and his family would eventually settle in Weilheim, West Germany. Heinrich left Germany a few years later, immigrating to the United States in 1955. He joined the U.S. Army in 1957 and proudly served as a member of the 15 th Cavalry Regiment for the next two years, including a tour of duty in Europe. He took his oath as a naturalized U.S. citizen in 1965. Shortly after leaving the army, Heinrich met the love of his life, Sara. They married in Cleveland, Ohio on July 15, 1961, and shared 60 years of marriage together. The couple moved from Cleveland to Strongsville in 1967, where they raised their three children. A tool and die maker by trade, Heinrich spent much of his working career at Teledyne Efficient Industries in Brecksville. Even before his retirement in 1996, he coached various youth soccer teams in the area and was active in the Cleveland Donauschwaben. He loved working in his garden; he played chess and the harmonica and was an avid fan of German soccer. He was “Henry” or “Hank” to family and friends; to his six grandchildren, he was “Opa.” Heinrich was preceded in death by his parents, Johann and Elisabeth Loos (née Binder), and a brother, Hans. Survivors include his wife, Sara Loos (née Schieb); sons Edwin (Dawn), Kurt (Lori), and Thomas (Aren) Loos; and grandchildren Abigail (Caleb) Cameron, Heidi (Jon- Michael) Cake, Stefan, Sommer, Kiera, and Isaac Loos. All services will be held on Saturday, April 30. Visitation will occur from 12-2 PM at Jardine Funeral Home, 15822 Pearl Rd., Strongsville. A funeral service will follow at 2 PM. He will be interred at Strongsville Cemetery, 13123 Pearl Rd., Strongsville.

Heinrich Loos passed away on April 24, 2022, at the age of 88. He was born to a German-speaking family in Bikal, Hungary on December 26, 1933. When he was just ten years old, he left Hungary with his mother, brother, and grandparents because... View Obituary & Service Information

The family of Heinrich Loos created this Life Tributes page to make it easy to share your memories.

Send flowers to the Loos family.