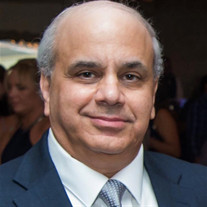 George Arslanian, age 64, passed away on June 26, 2019, in Jacksonville, Florida. He was born on April 14, 1955, in Cleveland, Ohio to Nazareth (“Nat”) and Mary Arslanian. George is survived by his mother, Mary (nee Kaprelian), brother Charles (“Charlie”) of Jacksonville, Florida, sisters, Cheryl (Jim Gideon) of North Olmsted, Ohio, and Lucine King (Ken) of Moorestown, New Jersey; nieces Melanie Kugel (Josh) of Tuckahoe, New York, Valerie Gideon, of Lakewood, Ohio, and Shannon King; nephew Robert King; and several aunts and cousins. George was preceded in death by his father Nazareth (“Nat”) Arslanian and niece Taline King. He was a best friend and soulmate to his brother Charlie and a loving uncle to his sisters and nieces, spending hours with them to help with homework, play games and sports, especially softball, Frisbee, ping pong and backgammon. George lived in Jacksonville for about 40 years with his brother Charles “Charlie.” Together they started a dog racing business called C&G Enterprises. Dog racing, sports and his family were George’s passions. George spent his developmental years in Cleveland, Ohio, E. St. Louis, Illinois, and Dayton, Ohio. During his high school years in Randallstown, Maryland, where, he graduated from Randallstown High School in 1973, he was an exceptional athlete. He played football and baseball, lettering in both. He once batted against a pitcher who eventually became a professional major leaguer, and got two base hits, the only one in that game to achieve this. George played men’s softball in the St. Gregory of Narek Armenian church team for 10 years and was known for his exceptional talent in the outfield. His nickname was “Hoover” because he vacuumed up any ball that came to him. After high school he briefly attended community college in Jacksonville, Florida and then moved back to Cleveland, Ohio. In Cleveland, he ran a convenience store before deciding to move back to Jacksonville. ALL SERVICES will be held on WEDNESDAY September 11, 2019, at St. Gregory of Narek Armenian Church, 678 Richmond Rd. Richmond Heights, Ohio 44143. VISITATION from 4:30PM-6:15 PM. MEMORIAL SERVICE 6:15 PM. Interment Private. In lieu of flowers, donations can be made “In Memory of George Arslanian” to St. Gregory of Narek Armenian Church, 678 Richmond Rd., Richmond Heights, Ohio 44143 or to The Taline King Charitable Fund, 1000 Bishops Gate Blvd, Suite 201, Mount, Laurel, NJ 08054. Condolences may be left on Jardine Funeral Home's online guest book at www.jardinefh.com.

The family of George Arslanian created this Life Tributes page to make it easy to share your memories.

Send flowers to the Arslanian family.