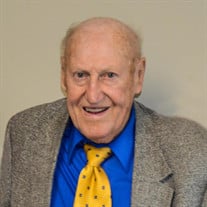 Frank Teubl Jr., age 91 of Hinckley, Ohio passed away Sunday January 31, 2021. Beloved husband of 54 years to the late E. Matilda Teubl (nee Brown). Loving father of Herbert (Linda), Ingrid (Frank) Marvin, Debbie (Dennis) Wolf and Roy (Jill). Brother of Hermine (deceased) and Elli Godri. Grandfather of Steven, Jeffrey, Alisa, Ashley, Bryan, Brittany, Marissa and Kara. Great Grandfather of Emily, Allison, Alexander and Elizabeth. He is preceded in death by his parents Frank Teubl Sr. and Elisabeth (nee Pfeiffer). Born in Zabalj, Yugoslavia, he arrived to America from Germany in 1952. A skilled mechanic, he started his own business in 1960, that soon became “Imported Auto Repair” which he owned and operated for over 30 years. He passionately played the accordion and was one of 5 members in his band “Violetta”. He greatly enjoyed traveling all over the world with his family and had a love for dancing and German music. He enjoyed his workouts and swimming exercises, even up until a few months ago, and loved spending time with family and friends. He was outgoing and involved with the Donauschwaben German-American Cultural Center and the Keglers Club, the Cleveland Maennerchor, and the German Central Organization. Visitation will be held at Jardine Funeral Home 15822 Pearl Road Strongsville, OH 44136, Thursday February 4, 2021 from 4-8PM. Mass of Christian Burial will be held at St. Colette Catholic Church 330 W 130th St, Brunswick, OH 44212, Friday February 5, 2021 at 11AM. Interment Holy Cross Cemetery, Brook Park. In lieu of flowers memorial contributions may be made to: UH Rainbows Hospital (UH Rainbow Babies & Children's Hospital) University Hospitals Institutional Relations and Development PO Box 94554 Cleveland, OH 44101.

The family of Frank Teubl Jr. created this Life Tributes page to make it easy to share your memories.

Send flowers to the Teubl family.