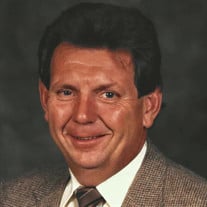 Francis “Frank” Bohac age 79 passed away February 10, 2021. Beloved husband of 53 years to Marie Bohac. Loving father of Kenneth (Kerry) Bohac and Edward (Sarah) Bohac. Cherished grandfather of Henry, Aidan and Amelia.Frank Bohac grew up on Fleet Avenue in Cleveland, where his family’s bakery provided bread and pastries to the neighborhood. As a young boy, Frank helped out by greeting customers and taking orders. It was probably here that a young Frank developed his talent for working with people and developing relationships. Frank was a proud alumnus of Benedictine High School, where he volunteered as an altar servant and played football for the legendary coach, Augie Bossu. Frank cherished his wife Marie whom he married in 1967. He worked tremendously hard to provide for her and his boys. After the family bakery closed, he worked as a baker for the next 30 years. Frank and his family lived in Parma, Ohio for several years, before moving to Brunswick, Ohio in 1976. About that time, Frank transformed an avid gardening hobby into a tiny side business in order to pay for his children’s college education. The idea was surely inspired by his summer visits to his grandfather’s small tree farm. By 2006, Frank’s tiny landscaping business had grown to 14 employees, was serving hundreds of customers across 4 counties, and had a dedicated facility. The company’s landscape team won an award at the Greater Cleveland Home and Garden Show in 2005. And, Frank was even featured in a national ad campaign for the equipment manufacturer, MTD. Ever the optimist, Frank was a dedicated Browns fan and season ticket holder for over 30 years. Baseball was his true passion, though. A talented catcher, he relished tagging would-be runners out at home plate, just as the ball arrived on a throw from the outfield. Frank enjoyed traveling with his wife, family, and friends. Destinations included South Carolina, Mexico, and several Caribbean islands. Frank was deeply dedicated to his Catholic faith. He volunteered regularly in church and community organizations. In 2000, Frank and Marie moved to Strongsville, Ohio, where he was a proud member of the Strongsville Chamber of Commerce, Rotary Club, and the City’s Architectural Review Board. Frank loved to throw a good party, and he was a gracious host. Christmas was his favorite time of year. Partly for the decorations. But, mostly for the joy of sharing with family and friends. And, Frank’s epic clambakes were the highlight of the neighborhood calendar each Fall. Later in life, Frank moved to Lakewood to be closer to his grandchildren who live in Lakewood and Bay Village. Relationships--connecting with people--were Frank’s true talent and his passion. He had an uncanny ability to instantly connect with people. He also believed in people--sometimes even when others could not. He was a walking affirmation statement. Always supportive, Frank was there to find the silver lining, cheer someone up, or lend a helping hand. True to his faith and his character, he was a true servant leader. Funeral mass will be held at St. Luke Catholic Church 1212 Bunts Road Lakewood, OH 44107 Saturday February 27, 2021 at 10AM. In lieu of flowers memorial contributions may be made to the Berea Animal Rescue Fund, 10015 East River Road Columbia Station, OH 44028.

The family of Francis "Frank" J. Bohac created this Life Tributes page to make it easy to share your memories.

Send flowers to the Bohac family.