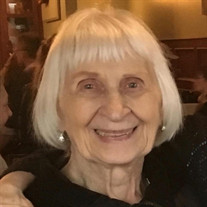 Elaine was born in Cresson, PA on May 25,1935, to the late Andrew and Anne Zurilla. It was her parents who gave her a strong foundation for what a loving family should be. She fancied herself a coal miner's daughter, as her Dad's early employment... View Obituary & Service Information

The family of Elaine Joan Woff (nee Zurilla) created this Life Tributes page to make it easy to share your memories.

Send flowers to the Woff family.