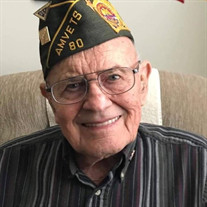 Charles John Nemec, U.S. Army Veteran, Son of the late Charles J and Mary (nee Kratovil), loving husband of June E. (nee Jacobi) for 64 years; step brother to Patricia (Mike) and Donald (Carole) and preceded in death by his beloved brothers, Thomas and Jack (Barbara). He was a wonderful and loving father to Debbie (George); Donna (Steve), David and Dale (Carrie). He will be remembered lovingly by his grandchildren; Bryan (Lisa), Molly (Matt), Caitlin (Matt), Megan, Joshua (Chelsea), Zachary (Eshani) and step-grandchild, Joseph. He was also a devoted great grandfather to Braden, Mae, and Charlie. Chuck, as he was known by friends and family, enjoyed a full life on earth. While in H.S. he was the Treasurer of his senior class. He and Ivan Mathias joined as partners to run a full service gas station called M & N Sunoco, which was in business for 38 years. Beyond his work life, Chuck was active member of St. John Lutheran Church and was also involved in the school that was run by the church. Staying active was also something that he enjoyed with family and friends. He was an excellent bowler, golfer and traveled the United States in a pop-up camper with June and their four children. Throughout his life he was an avid pinochle player, playing with his uncles and brother on a weekly basis. Even later in life, when his vision was poor, he could beat you in a pinochle game. Later in life, he became an active member in AARP. Chuck was also a proud member of the AMVETS Post 80 and he served as a rifleman for military funerals for 15 years. Services at Jardine Funeral Home, 15822 Pearl Rd., Strongsville on Saturday, January 9, 2021 at 11:00 am. Interment at Rittman National Cemetery to be held at a later date. In lieu of flowers family requests that donations be given to Royal Redeemer Church, 11680 Royalton Rd, North Royalton, OH or St. John Lutheran Church 11333 Granger Rd, Garfield Heights, OH.

The family of Charles John Nemec created this Life Tributes page to make it easy to share your memories.

Send flowers to the Nemec family.