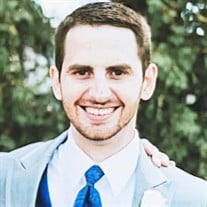 Brian James Barnes, 27, passed away May 1, 2021. Beloved son of Mary “Fran” and Bruce Barnes. Devoted partner and father of Shani Swigeart and son, Abel Swigeart. Dear brother of Jay “Drew” Clevenger (Kelly). Uncle of Keelin, Evelyn, and Finnigan Clevenger. Nephew of Gary (deceased) and Suzanne Barnes, Eileen Barnes, Maurie Luna (Allen), Patrice Mattox (Steve), Mary Holland (Randy), Beth Dehner (David), Chris Hawk (Mary), and Sue Demeter (Jeff). Cousin of Britney Young, Carley Barnes, Michael Barnes, Michele Thigpen, Chris Thigpen, Jim Mattox, Jennifer Royal, Laura Novotny, Suzanne Reed, Rachel Dehner, Jacob Hawk, Jessica Hawk, Jordan Cole, and Hannah Harley. Brian went to Sts. Joseph & John School in Strongsville, OH. His love of basketball started there where he played with the Vikings. He went to Benedictine High School in Cleveland following in his father’s and uncle’s footsteps to be a “Man of Benedictine”. He ran Cross Country for 4 years under Coach Lev. His love of basketball continued, but the 2 sports overlapped so he became Rob Stircula’s manager, stat and video coordinator for the basketball team. He continued that course when he became the Student Manager at Central Michigan University in Mount Pleasant, MI. and was part of the MAC Western Conference Division Champions in 2015. He graduated from CMU with a Sports Management Degree and a minor in Coaching. After he graduated from CMU he was welcomed to the Kent State Men’s Basketball Program by Rob Senderoff and staff. He got his Master’s Degree from Kent State while he worked as the Video Coordinator and Assistant to the Coaching Staff. He was also part of the 2017 MAC Tournament Winners and was with the team when they went to the NCAA Tournament. He became the Director of Basketball Operations where he continued to work until the time of his death. He LOVED Basketball. He LIVED Basketball. He was nicknamed Shadow by one of his coaches at CMU because Brian was content to be in the “Shadows” to help do whatever the team needed to become successful. His newest LOVE was his girlfriend Shani and he ADORED his new son, Abel. His life choices were changing and he was looking forward to the next chapter in his life of having more children and teaching his children to be loving, caring and fun loving in life. Brian loved to joke and kid around with his nieces and nephews. He truly loved kids! Brian was always working to do his best in anything he did. It might not have been the best for other people, but it was the best he could do. Brian had Attention Deficit Disorder. He didn’t use it as an excuse for not being able to do things. He was in National Honor Society and took AP classes in High School. He was a loving, soft spoken, wonderful man who knew what he wanted and put his full efforts into achieving what his goals were. He will be missed by so many, but in our hearts, thoughts and dreams for the rest of our lives. Starting his new life in heaven we are sure he got the job of Director of Video Events and has already gotten the ball rolling with his videos of loved ones here on earth. We can’t wait to see him again when we arrive in heaven. He will meet us with a greeting, handshake, smile and his personal introduction to God. We are establishing the Brian James Barnes Memorial Basketball Fund to help inner city youth be able to attend youth basketball camps during the summer. Donations can be made to the Fund via any Huntington National Bank. VISITATION THURSDAY 3-7PM at JARDINE FUNERAL HOME, 15822 PEARL RD, STRONGSVILLE. Mass of Christian Burial FRIDAY 10AM at St. John Neumann Catholic Church, Strongsville. Interment private. NO FLOWERS PLEASE.

The family of Brian James Barnes created this Life Tributes page to make it easy to share your memories.

Send flowers to the Barnes family.