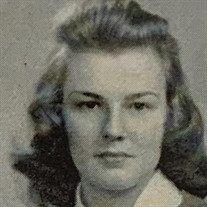 Anne Davies, Vienna, WV resident, passed away peacefully surrounded by family members in Strongsville, Ohio on February 10, 2022. Anne Schuyler Lawrence Davies was born on June 3, 1924 in Fargo, North Dakota, the daughter of Ruth Schuyler and Raymond Lawrence. Her early education was in Washington, D.C. public schools and the National Cathedral School. She was a graduate of the Georgetown University School of Foreign Service, studied at the University of Mexico and later pursued her interest in Spanish literature at Marietta College. She received a master’s degree from Ohio University. While in Washington, Anne held a research position in the Latin American Division of the Food and Agricultural Organization of the United Nations. She was a teacher of Spanish and counselor at Parkersburg Catholic and Parkersburg High Schools and served for several years as a citizen member of the Juvenile Justice Commission of the West Virginia State Legislature. She has served on the Vienna Recreation Commission and Committees of Habitat for Humanity and was a member of the Junior League of Parkersburg, PEO Chapter L and the Memorial Church of the Good Shepherd. She was preceded in death by her husband, John Rhys Davies and her sister, Joan Lawrence Neuhauser. She is survived by a son, Thomas Davies of Vienna(wife Sandra) and two daughters: Annette Ehrnfelt(husband Walter) and Suzanne Meldon of Strongsville, Ohio, grandchildren Mary Ehrnfelt Canonico(husband Jesse), John Ehrnfelt(wife Lauren), Thomas Ehrnfelt(fiancée Diana Maher), Anne Davies Hilson(husband Joseph), Ellen Davies, Will and Michael Meldon and great-grandchildren John, Kyle and Anne Canonico, Elliott and Mae Ehrnfelt and Thomas and Rhys Hilson. Memorial donations may be made to the Children’s Home Society of West Virginia, PO Box 763, Parkersburg, WV 26102. A memorial service will be held Saturday, April 23, 2022, 11a.m. at First Lutheran Church, 1701 19th St, Parkersburg, WV. A luncheon at the Parkersburg Country Club, 4910 First Avenue, Vienna, WV will follow the service.

The family of Anne Davies created this Life Tributes page to make it easy to share your memories.

Send flowers to the Davies family.