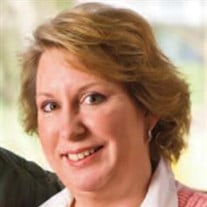 Amy is survived by Ken, her husband of 35 years and soulmate of 43 years; sons Kyle (Monique Fogos) and Ryan (Rebecca Petro), mother Patricia Antenucci; sisters Anita Klima (Ken) and Anmarie Bocan (Dan); mother in law Marty McEntee; sister/brother in law Sharon and Rob Hansen; nieces Andrea and Carolyn Klima; nephews Jake Hansen and Kellen Haynes. She was preceded in death by father Donald Antenucci, father in law Dennis McEntee and brother in law Ron McEntee. Amy was delivered at Fairview General Hospital by the same obstetrician who delivered her future husband six months earlier. She grew up in Brook Park, Ohio, attending Davies Elementary School and Ford Junior High School. She graduated in 1981 from Berea High School, where she met Ken in the school’s marching band. Amy was the co-captain of the band’s flagbearer team. Amy attended Cuyahoga Community College, then Cleveland State University, graduating in 1985 with a Bachelor degree in social work, specializing in gerontology. She was employed by The MetroHealth Clement Center, then the Cuyahoga County Board of Developmental Disabilities, before leaving social work to become a full-time mom in 1995. During the late 1980s and early 1990s, Amy also owned, along with her father in law, Amy’s Army housecleaning service, and since 1995, she has been office manager of McEntee Media Corp., a business she owned with Ken. Amy was active at all of the schools that Kyle and Ryan attended. At Big Creek Elementary School, in Middleburg Heights, she constructed a giant paper mache tree in the lobby to recognize a “tree-mendous student” each week. After moving to Strongsville in 2000, she was involved in PTA and numerous other activities at Drake Elementary School, Strongsville Middle School and Strongsville High School. She coordinated annual carnivals at Drake and served as a marching band chaperone at the high school. For about six years, she organized the monthly Rockin’ at the Rec student dances at the Strongsville Recreation Center. She also was instrumental in organizing some of the city’s twice annual DARE dances. For the past 10 years or more, Amy was active in Arts in Strongsville, most recently as vice president. She organized the organization’s annual Art and Chalk Walk on the Strongsville Commons, was the volunteer coordinator for the annual A Day at the Chalet free arts festival for kids, and was an organizer of the annual Cabaret Night fundraiser. Amy also was a regular volunteer for the Rotary Club of Strongsville. At home, Amy was most often seen in the kitchen, preparing home-cooked meals for family inside and outside her home. She kept alive the traditional sauces and recipes of her Italian grandmother and enjoyed experimenting with new cuisine, primarily Indian and Thai. Amy made a place at the table for anybody who happened to be in the house during dinnertime. Outside, Amy spent countless hours manicuring the yard, growing flowers and tending to a plot at the Strongsville Community Garden. Above all, family was Amy’s greatest joy. Through the years, her family included her cherished dogs – Sonny, Skippy and recent rescues, Buddy and Bailey – along with her “grand-dogs” – Turbo, Comet, Bart and Stan-Lee. Visitation will be held at Jardine Funeral Home 15822 Pearl Road, Strongsville, OH 44136 Thursday September 16, 2021 from 3-6PM where a memorial service will immediately follow at 6PM. In lieu of flowers, memorial contributions may be made to the Berea Animal Rescue Fund, www.bereaanimalrescue.com

The family of Amy McEntee created this Life Tributes page to make it easy to share your memories.

Amy is survived by Ken, her husband of 35 years and soulmate...

Send flowers to the McEntee family.