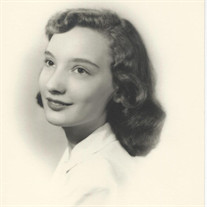 Alice Suzanne (nee Hanchar) Signorelli, 90, passed away on May 21, 2021, at Southwest General Hospice, as the result of a serious cerebrovascular event. Her daughter and a sister were at her side. Alice was born on February 15, 1931, in New York City, NY, the daughter of the late Edward Hanchar and Kathryn (nee Rozycki) Hanchar. She attended Erasmus Hall High School in Brooklyn NY, home of other notable alumni such as Sam Rutigliano and Barbra Streisand. Four years later she graduated with a Bachelor of Arts from Barnard College (part of Columbia University) in New York, NY. It was during her college years that she met Robert A. Signorelli, a handsome engineering student at Columbia University and fellow Newman club member. Following their marriage in 1953, Alice followed Robert to Cleveland where he had joined the Federal government agency that later became NASA, putting his metallurgy skills to use at what is now Glenn (Lewis) Research Center in Brookpark, Ohio. Soon after arriving in Cleveland, they became the parents of R. Bradford, Thomas, and later, Katherine. In 1957 they built their first family home in Strongsville and remained proud Strongsville residents until their deaths. Alice was very dedicated to her growing family and an active member of St. Joseph’s Catholic church, however she still found time to pursue additional academic and civic endeavors. She earned a Master of Arts degree in Education from Western Reserve University (now part of Case Western Reserve University) in 1963. As part of her M.A. program, she founded in 1959, the first non-profit co-operative preschool in Strongsville, which exists to this day. She officially joined the Strongsville City School District in September 1965, first as a substitute teacher and then full time in 1968, teaching 6th grade English Language Arts and Science/Health at Allen and then Zellers elementary schools. During her 28 years as a teacher, she initiated many extracurricular activities such as putting on plays, publishing a yearbook and maintaining a menagerie of class critters (hamsters, guinea pigs, rats and tropical fish). Alice was also very involved in Strongsville’s civic life; she was active in Women’s League over many years, wrote the historical brochure for Strongsville’s Sesquicentennial (150-year anniversary of the town’s founding) in 1966, and was an instrumental member of the Friends of the Library group in the construction of Strongsville’s first Cuyahoga County Public Library branch building on Pearl Rd, which opened in 1971. Throughout her life, Alice held fast to her religious beliefs and was often a reader or Eucharistic minister. Above all, was her abiding love of her children and especially her husband Robert with whom she shared 64 years of marriage. They were true partners and lucky to have spent many years traveling the globe together, playing cards with their friends, and always eating well, often something new from Alice’s exhaustive recipe collection! Her family and friends will always remember her indomitable spirit, independent streak, sharp intellect, optimistic outlook and easy laugh. Alice is survived by her three children, R. Bradford of Ravenna, Ohio, Thomas R. of The Colony, Texas and Kathy (Signorelli) Petrat of St. James, NY; her three grandchildren, Matthew C. Signorelli, Robert Nicholas Signorelli, and Ryan A. Petrat; and her two sisters, Jessica Hanchar Gerdes (Illinois) and Cynthia Hanchar Gerdes (Minnesota), and five nieces and nephews. In lieu of flowers, we welcome donations to: Thomas Perciak Family Residential Hospice (18659 Drake Rd; Strongsville, OH 44136; 440-816-5040) or American Heart Association (www.heart.org). A Memorial Mass will be held at St. Joseph’s Catholic Church, Strongsville on June 17th at 11:30am with visitation one hour prior.

Alice Suzanne (nee Hanchar) Signorelli, 90, passed away on May 21, 2021, at Southwest General Hospice, as the result of a serious cerebrovascular event. Her daughter and a sister were at her side. Alice was born on February 15, 1931, in New... View Obituary & Service Information

The family of Alice Suzanne Signorelli created this Life Tributes page to make it easy to share your memories.

Alice Suzanne (nee Hanchar) Signorelli, 90, passed away on May...

Send flowers to the Signorelli family.